Not that anyone had any plans for fracking there anyway:

The Prince George’s County Council voted unanimously today to ban fracking within the county. The measure, introduced by Councilwoman Mary Lehman, amends the zoning ordinance to prohibit the gas drilling technique in all areas of the county, which sits atop a known gas basin. The ban goes into effect immediately and comes after months of work by citizens supported by the Chesapeake Climate Action Network, Food & Water Watch and the Sierra Club.

Councilmember Lehman said in voting for the bill this morning, “Our action here today will lay the groundwork for a statewide ban in Maryland.”

Prince George’s, Maryland’s second most-populous county, is the first county to adopt a ban on fracking since the Maryland General Assembly passed a two-year moratorium on the practice last year. The moratorium comes to an end in October 2017, leaving the state vulnerable to this dangerous drilling process. To date, one other Maryland county has taken similar action. In the fall of 2014, the Montgomery County Council adopted a change to its county zoning laws that essentially prohibits fracking. 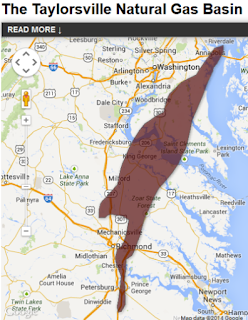 "This dangerous drilling practice" has been used approximately 2,000,000  times in the US to produce billions of gallons of badly need oil and natural gas, all without significant envirornmental


Outside of Western Maryland, Prince George’s County is one of the Maryland counties most at risk for fracking. The southeastern third of the county sits on top of the Taylorsville Basin, which extends northeast from Richmond, Virginia to Annapolis, Maryland and is estimated to contain more than 500 billion cubic feet of gas. Across the Potomac River in Virginia, a Texas-based company has already leased more than 80,000 acres for potential fracking in the Taylorsville Basin. Parts of Charles, Anne Arundel, Calvert and St. Mary’s Counties also sit atop this basin.


Counties and states that ban any sort of energy production should be required to pay a special tax to pay the environmental costs of  the jurisdictions that bear them on their behalf.
Posted by Fritz at 5:00 AM