It's More Than OK, It's Even Desirable

Cheerleaders, it turns out, are expected to have a certain look.

“U-Dub” students (hey, that’s just one letter away from U Dumb!) were unloading on social media, crying to counselors and fleeing to safe spaces after the cheer team posted an infographic describing the look to strive for if you’re planning to try out for the squad. (In the routinely craven manner of all universities, the UW spirit program ordered the graphic removed and called in nine tons of smelling salts for those affected.)

Liberalism is the fear that somewhere, somehow, someone is enjoying something that you don't.

I repeat: The graphic was aimed only at young women seeking to be cheerleaders. Pasty-faced Womyn’s Struggles majors attending rallies in shapeless sweatshirts, and black-clad Emily Dickinson fans emoting agonized coffeehouse verse were not the target audience. It takes all kinds to make up a student body: dimpled, flirty blond girls with Southern accents and sour, achy ones who cut themselves among them.

“I can’t believe this is real,” Jazmine Perez, the student government’s director of programming told the Seattle Times. “One of the first things that comes to mind is objectification and idealization of Western beauty,” she harrumphed.

Shockingly, Jazmine seems to live up to the standards of objectification and idealization of Western Beauty in her own photos for her position. She only resents it when the party girls do it. Although a STEM major, this one is a lawsuit waiting to happen.

Signe Burchim, a UW senior, added, “I think it’s really upsetting and kind of disheartening the way it’s basically asking these women who want to try out to perform their femininity — but not too much.” She said men would never be subjected to such a message while trying out for a sport.

When trying out for a sport, men are pretty much expected to be able to perform the sport with moderate proficiency to start with. Look, if you don't want to be a cheerleader, don't get into good shape and learn some cheer leading moves. You might enjoy video games, or just bitching about something else, for example. 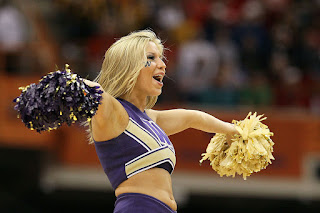 Cheerleading is a sport? No, cheerleaders are dancers and acrobats you watch when there’s a break in the actual sport — the one where they keep score and report the results in the papers. And anyone who’s seen the cheer squads during, say, March Madness can tell you that for colleges like UW with co-ed cheerleading, there’s clearly a standard for dudes, too: If you look like Marilyn Manson or Howard Stern, you aren’t going to be picked. Always and forever, they’re looking for 1965 Mitt Romneys. Those who don’t already possess a large collection of pastel sweaters they tie rakishly around their necks need not apply. 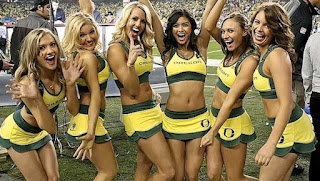 And then you can go on to make a billion or so rescuing companies from the ravages of government.


Contrary to Ms. Perez — who reminds us that college is a place where you pay $50,000 a year to unlearn the obvious — female beauty standards like facial symmetry and waist-hip ratio are pretty much universal. But here’s the thing she missed: The graphic made no demand that cheerleaders be pretty. Everything illustrated has to do with styling and presentation, not your actual attractiveness. And no, it isn’t racist: Race is nowhere mentioned or implied. 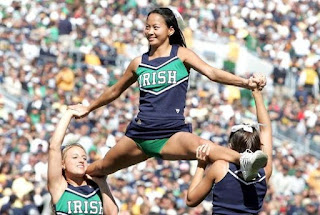 "College is a place where you pay $50,000 a year to unlearn the obvious". Now that's a great line, I'll have to remember it. Sometimes what seems obvious is wrong, but mostly it's just obvious. It shouldn't take $200 or $250 k to learn the difference. I'm sure glad I didn't pay anything near that amount.


Tailoring your look to a group’s standards is how almost everything works. You don’t show up to play baseball in a scuba suit. You don’t show up for a business meeting in board shorts and flip-flops, unless you work in Silicon Valley, in which case you don’t show up in a tie and wingtips. And you don’t wear Goth makeup, “Born To Be Bad” tats and fishnet tights to a cheerleading tryout — unless you’re doing a performance art piece, which might actually be funny.

Sometime, the cheerleaders all ought to wear fat suits and dumpy clothes to look like Lena Dunham. But not when I'm in the audience.

Brought to you from EBL via Wombat-socho's "In The Mailbox: 04.28.16". Wombat-socho has the giant "Rule 5 Sunday: Blue Shirt Double-Dip Edition"  ready at The Other McCain.
Posted by Fritz at 6:00 AM