God, the FBI and Clinton.com 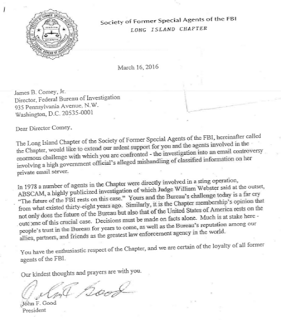 
In 1978 a number of agents in the Chapter were directly involved in a sting operation, ABSCAM, a highly publicized investigation of which Judge William Webster said at the outset, "The future of the FBI rests on this case. Your's and the bureau's challenge today is a far cry from what existed thirty-eight years ago. Similarly, it is the Chapter membership's opinion that not only does the future of the Bureau but also that of the United States of America rests on the outcome of this crucial case. Decisions must be made on facts alone. Much is at stake here--people's trust in the Bureau for years to come, as well as the Bureau's reputation among our allies, partners, and friends as the greatest law enforcement agency in the world.

Why retired? Well, they can't be fired, demoted or harassed. Ace notes:


In 1973, the public hoped, and expected, that justice would be done in the Watergate case. No such hope or expectation exists today. Everyone knows the fix is in. America is broken, probably beyond repair. America is just Imperial Rome now with better technology and worse weather.

Irregularities in New York primary robbed some of right to vote, say Sanders supporters and officials. As Instapundit notes, it's funny how this never happens to Hillary. And money just sort of falls on her head for no reason whatsoever. Why Did Congo Offer Clinton $650,000 For Two Pics And A Speech? We don't know, but the answers could be in the 30,000 emails the Clintons held back as "personal." Wall Street Mega Donors Dominate Clinton’s Fundraising Committee Support. Well, duh. Do they have any use for Bernie, the Donald or Teddy?

RNC To Hillary: Will You Pay The Extra Taxes You Want To Force On Other Americans?


Under Hillary Clinton’s own tax plan, those making more than $5 million a year would be required to pay a surcharge to the treasury. In doing the math, since 2001, the Clintons would need to pay nearly $5 million more in taxes to comply with their own proposal. Clinton’s campaign tells Breitbart News she’ll pay that much just as soon as the RNC agrees to the rest of her policy agenda.

“As Hillary and Bill Clinton’s financial and estate planner, as well as their personal accountant, I am writing to you on this annual tax day to inquire as to whether Hillary Clinton has chosen to put her money where her mouth is, and pay the additional taxes she is hypocritically proposing that other Americans of similar income pay, but not said she is willing to voluntarily pay herself,” Priebus writes in the letter to Gregorio, a copy of which was provided exclusively to Breitbart News ahead of its public release.

Are you crazy? Taxes are for the other rich people!

Of course, Clinton campaign blames Democrats’ ‘sexism’ for high unfavorable ratings. I don't see how she can stand to represent such bigots.

As brought to you by Wombat-socho's "In The Mailbox: 04.19.16", the usually sensible Megan McArdle says Your Assessment of the Election Is Way Off. How does she know what my assessment of the election is?


I have been variously assured, with complete confidence, that “no one” will vote for:
We are apparently facing four years of the “none of the above” administration.
These people are not exactly wrong about the weaknesses of their opponents. But in all cases, they vastly overestimate the strength of these objections. They seem to believe that their own personal revulsion is natural instincts, shared by all but a tiny, mad slice of the voting public. I used to see this in Manhattan, where the population was not only homogenous, but also in charge of much of the media. But thanks to that media, the rest of the country was at least aware that a powerful chunk of the electorate disagreed with them on many, many things.
. . .
I submit that the answer is a sort of mass delusion. People aren't just angry; they're also out of touch with the possibility that other people aren’t angry, or at least, not angry in the same way, at the same people. And the result is political chaos.
. . .
Start dreading November. This new obliviousness is bad enough for us as individuals at Thanksgiving. It’s going to be even worse for our nation on Election Day.

Wesley Pruden offers How the Donald could defeat Hillary


God and the FBI may have an indictment in store to roil the campaign, but even if not Benghazi and the top-secret emails she opened to hackers will dog Hillary all the way to November. Her coughing fits — she suffered another on Monday that cut short an important radio interview in Manhattan — continue to raise concerns about her health. It is true that indictments and convictions won’t necessarily disqualify her in Gotham (it’s a New York value), but it won’t enhance her pristine appeal elsewhere. Hillary would no doubt go into the post-conventions campaign the favorite, but carefully plotted political campaigns, like military campaigns that might have been designed by Stonewall Jackson, are outdated with the first shot fired.

Hillary is probably the way to bet, but it’s too soon to lay down a bet. The Republican elites should keep this in mind.