In the absence of news on Clinton.com, I suppose I can take this opportunity to clean out the Obamacare cesspit:

The GAO released a report on its findings last month but that report did not name the 3 states involved. It took an FOIA filing by the Associated Press to get that information:


Federal investigators found significant cybersecurity weaknesses in the health insurance websites of California, Kentucky and Vermont that could enable hackers to get their hands on sensitive personal information about hundreds of thousands of people, The Associated Press has learned. And some of those flaws have yet to be fixed.

The full GAO reports says investigators found “significant weaknesses” in those three states and spelled out how those weaknesses could be used to compromise accounts and gain access to the systems (though it did not reveal which flaw was found in which state):

How Obamacare Just Made Filing Your Taxes Worse


In 2015, for example, annual premiums for “low-cost” bronze plans obtained through the law’s exchanges averaged $2,484 for individuals and $12,420 for families with three or more children. If you don’t think this pricier insurance is worth the cost, or simply can’t afford it, you’ll likely face tax penalties upon filing your return.

That is money many families just don’t have. According to December 2015 estimates from the Kaiser Family Foundation, the average household without compliant coverage faces $661 in tax penalties for 2015, rising to $969 for 2016. The penalties are even higher for those not eligible to receive premium subsidies under the law: $1,177 for 2015, rising to $1,450 this year. While some will be exempt, millions of families and individuals will be penalized for not purchasing health insurance they cannot afford.

That’s a raw deal, especially as the Affordable Care Act has done nothing to lower insurance costs like its supporters claimed. In fact, a new study by my organization using the White House’s own data found premiums for employer-sponsored health plans—a widely-cited benchmark of health insurance costs—have actually risen faster since the law was signed. The only difference is now, families and businesses that can’t afford it will have to pay a tax instead. 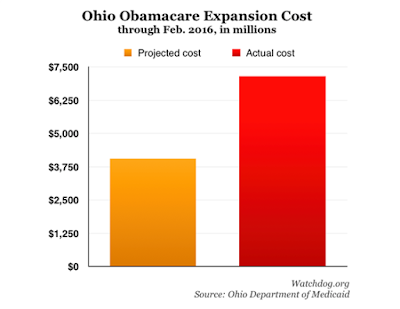 For the New York Times it's a victory that Obamacare hasn't completely destroyed private healthcare: Despite Fears, Affordable Care Act Has Not Uprooted Employer Coverage. But see the second bullet above. 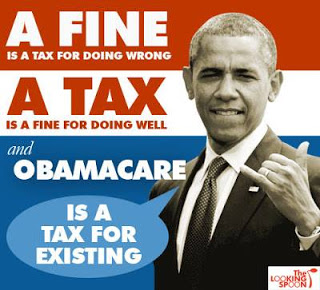 Remember being taunted by Nasty Pelosi that "we have to pass it to find out what's in it?" - We keep finding out the Affordable Care Act is unaffordable.

Remember Barry promising that health care premiums would FALL by $2,500 per family? - They have instead RISEN by $4,865 per family.

Remember Nov 2015 when the largest U.S. health insurer UnitedHealth cut its 2015 earnings forecast and said it may quit the business entirely in 2017 because it has proven too costly? - Then you won't be at all surprised to hear the UnitedHealth won't be selling coverage next year in Georgia or Arkansas, and declines to comment on plans to drop other states.

Proving the old adage "there is no problem government can't make worse by fixing it" UnitedHealth, Aetna Inc, Blue Cross, and Blue Shield ALL posted losses last year thanks to Barry's "signature domestic policy achievement." - More simply put, so that even "progressives" can understand it:


ObamaCare is a tax for living.