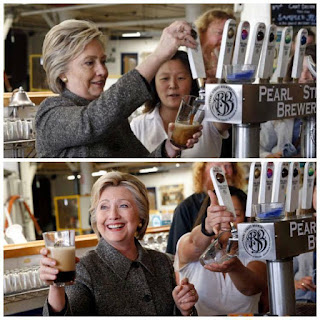 Heady times? Bring on the head jokes. Via Althouse.

A Vast Email Conspiracy - Hillary’s biggest problem isn’t Bernie. It’s the Freedom of Information Act. It's paywalled at the Wall Street Journal, but I assume you know how to get around that:

State wants to put off-limits the questions that are at the heart of the Clinton email scandal. And no surprise. The Judicial Watch discovery holds the potential to expose the many and varied ways Mrs. Clinton may have skirted the rules, and in turn to put enormous pressure on the FBI to act. These depositions meanwhile are currently set to happen this summer, right before the Democratic convention.

The beauty of FOIA is that it is designed to bring things to light. Mrs. Clinton has grown talented at outfoxing investigators, Congress, inspectors general, the press. But she made the error this time of playing games with a law that federal judges take seriously, and that gives outside watchdogs real leverage.

Source: No 'coincidence' Romanian hacker Guccifer extradited amid Clinton probe. Guccifer, you may recall, bragged about reading Hillary's email with his breakfast. Having him available to show that Hillary's email system was, in fact, breached casually can't help her case. Ace more or less agrees with this:


An expert opines that Guccifer will only be used to demonstrate how easy it was to crack Blumethal's private account and thus (I guess) how negligent Hillary was in handling classified information.


It's disturbing (and darkly comic) that Clinton, a graduate of Wellesley and Yale, and Blumenthal, a graduate of Brandeis, could be outed by this bored high school grad in a ramshackle village in Romania that, according to Rosca, doesn't even have a gas station.


"If you make something illegal, what are the consequences for that illegality?" she said. "So it's really just a half a step away from what they've been saying for some time."


"There is not even the remotest chance that is going to happen. But look, they've been after me, as I say, for 25 years. And they have said things about me repeatedly that have been proven to be not only false but kind of ridiculous," she said.

Meanwhile, over on the Congress side of this investigation into Benghazi, the State Department has turned over documents requested more than a year ago, just in case anyone should ask why something is being done so close to the election.Trey Gowdy:


It is deplorable that it took over a year for these records to be produced to our committee, and that our Democrat colleagues never lifted a finger to help us get them. Shame on them and everyone else who has demanded this committee to give up before gathering all of the facts. This investigation is about a terrorist attack that killed four Americans, and it could have been completed a lot sooner if the administration had not delayed and delayed and delayed at every turn. For example, the committee still does not have records we requested over a year ago, and we are still waiting for some witnesses to be made available for interviews. . . .

It was a big day for Democrats to back off previous statements. Bernie Sanders: ‘Of course’ Hillary Clinton’s qualified, let’s focus on issues and Bill Clinton: 'I Almost Want to Apologize' for Exchange With Black Lives Matter. I almost want to believe him.

Rube self identifies: Black Lives Matter co-creator: Hillary talking out of both sides of her mouth.

Will this be tomorrow's back up? Forget ‘Unqualified’, Watch Bernie’s Campaign Manager Blame Hillary for Rise of ISIS!!. Sure. After all, it's the truth.

Or maybe this: Sanders aide: Don't destroy Dem party to satisfy Clinton's 'ambitions'. Why should Bernie Sanders care? He's not really a Democrat is he? He's a Socialist.

Dems worry Sanders-Clinton rhetoric risks White House win. Lot's of kids who were happy O-voters are going to be very disappointed when Clinton pull the rug out from under their Bernie. I'm expecting big turnout issues for the democrats. Hillary's just not that likable. Is an increasingly nasty Clinton-Sanders race doing lasting damage to Democrats? In a nutshell:


In an interview with The Washington Post on Thursday, Sanders stood by his view that Clinton is not qualified — but he also pledged to support her if she is the nominee.

And Yes, Hillary Has Lost Her Momentum Bring on the inertia! And back to the email controversy:


Contributing to Ms. Clinton’s frustrations is the controversy surrounding her use of a private e-mail server during her tenure as Secretary of State, which has resurfaced as a major obstacle to her candidacy. “The Clinton campaign has attempted to make the public believe that she is not guilty of anything because the information on her very unprotected server was not ‘marked as classified’ or ‘classified at the time,’” wrote Ronald Sievert in USA Today. Mr. Sievert explained, however, that the information contained on the secret server never had the chance to be reviewed and classified by a security officer—which, in accordance with the law, should be sufficient, he argues, to warrant prosecution. Sievert notes, of course, that prosecution is unlikely. “Part of the reason is that the political appointees who make the final decisions will at least unconsciously be searching for ways to evaluate the case in a way that would evade an obvious debacle for the Democratic Party,” he wrote. “Unfortunately, it is likely that, at this very moment, many good lawyers at DOJ may be using all sorts of sophistry and rationalization to try to avoid applying the plain language of the law to Hillary Clinton.”

Regardless of what the e-mail server controversy end-game is, the entire affair is a perfect illustration of Ms. Clinton’s poor leadership and judgment. The longer Ms. Clinton’s shortcomings are exposed to the general public, the more her support diminishes and Mr. Sanders’ grows.

The perfect metaphor for the Clinton campaign:  Clinton Camp Used Static Noise to Drown Out Speech

Why we vote for the President and not the First Lady: Laura Bush hints she'd rather see Hillary as president (than Trump). The Bushes and the Clintons have been rather chummy over the last few years.
Posted by Fritz at 11:06 AM