“I guarantee that there is no political influence in any investigation conducted by the Justice Department, or the FBI, not just in this case, but in any case,” Obama said.” “Nobody is above the law. How many times do I have to say it?” 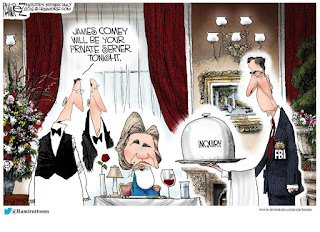 There's now magic number that will turn a lie into a truth. If there was, Hillary Clinton would know it. But Jazz Shaw at HotAir thinks:


I’m not saying I don’t believe him, but… okay. I’m pretty much saying I don’t believe him. But since I can’t prove it, take the interview as you see fit. These claims also indicate that there was never any discussion between Obama and Lynch (directly or through aides and surrogates) prior to the DoJ decision to flush the embezzlement case against Huma Abedin. Given the, shall we say, delicate nature of that episode, I’m rather skeptical of the idea that Barack Obama would be left entirely in the dark or that he would want to be.

But then he probably didn't need to use "influence" to get what he wanted in the IRS scandal either.

He also said  Clinton Didn't "Intentionally" Put America In Jeopardy. But as we have said repeatedly made the point that negligence with America's state secrets is sufficient. Gen. Patreaus didn't intentionally put America in jeopardy; he told secrets to his mistress to help her write a book. Furthermore Obama downplayed the importance of Hillary's sloppiness. Obama On Clinton’s Emails: ‘There’s Classified, And Then There’s Classified’

True, but sometimes the secret is what you think about the stuff, and not that it exists. It was not a decision for Hillary to make, or at least if it was (she was, after all, nominally SecState), she did nothing about it formally.


And from Powerline, a new classification: NOT REALLY TOP SECRET TOP SECRET

Loose translation: forget about it. The fix is in.

Incidentally, the exposure of national defense information through gross negligence makes out a felony violation of the Espionage Act. You don’t have to mean to do it. You just have to do what Clinton did.

And not to forget how the email scandal got started: Obama Cites Lack of ‘Day After’ Plan in Libya as Biggest Mistake. Libya was Clinton's main accomplishment in office, in addition to running up her flight miles.

And Democrats and Republicans alike seem to be playing dirty pool when it comes to the nomination process: Rigged race means Hillary takes more delegates in Bernie’s Wyoming win. At least Ted Cruz didn't make the Republican voters in Colorado pretend to choose.


Much has been said about the generation gap that has caused younger women to prefer Sanders over Hillary Clinton. As the parent of a politically savvy African-American 20-something, I have seen the same gap open up between black millennials and their elders.

Too young to remember the peace and prosperity of the 1990s, today's youths are more familiar with mass incarceration, violent crime surges, viral videos of police brutality and losses in many black households of economic gains they made in the Clinton years.

But Hillary voters can take heart in the fact that they'll always have academia:  Academia Hearts Hillary: Clinton Bags 84% Of Top 10 College Donations. Academia is not the place to go to find common sense.

From Jonah Goldberg: BUBBA BITES BACK


So where was I? Oh right Phoenix, Clinton, Black Lives Matter. I found the whole episode interesting for three however many reasons I come up with below.

1. Bill is doing something Hillary won’t: defend the Clinton record of the 1990s. Hillary’s happy to campaign on the gauzy nostalgia for the 1990s, when the gauzy nostalgia helps her. But the moment the politics change from taking credit to taking responsibility, she quietly slinks away like Joe Biden after farting at an arms-control summit. (“Look at Putin’s face! He thinks it was his translator! He’s gonna have that guy killed!”). . .