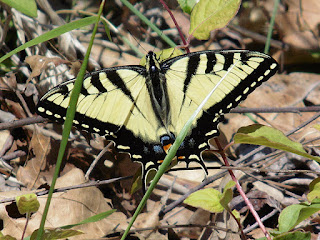 As I have mentioned before here, "butterfly season" seems to be getting off to an early start this year, with warm weather bringing them out in early March. Here are three I found at the dog park in the last week, wandering around with a camera. The big yellow Easter Tiger Swallowtails are everywhere already. I spotted a Spicebush Swallowtail today in the neighborhood, the first this year, but no photo. 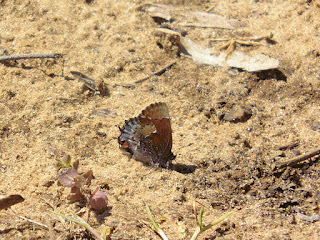 A little one that I see in the back yard high in the trees, but find it hard to photograph, Henry's Elfin. They usually stay in the trees, but maybe this one was trying to puddle in the moist sand. These a short termer, having one flight in spring, and disappearing for summer and fall. They're about as big as a medium sized fingernail. 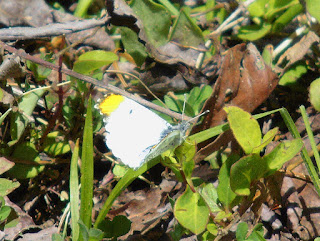 Another short term resident, the Falcated Orangetip, named for the uhh, falcated (hooked) orange tip? These too have a single flight in spring, and disappear for the rest of the year. It's hard to see the orange tip in flight, and only the males have it; the females are just white on top, but they both have olive green mottling on the underside. From a distance, they're easily confused with the dime a dozen Cabbage Whites or the white form of the Clouded Sulphur. They're a bit smaller, and fly a little different, but it's kind of a hard call.
Posted by Fritz at 4:28 PM