Down By the River

Dominion Energy will begin dumping coal ash wastewater into state waters on April 27th after receiving permits from the Department of Environmental Quality (DEQ).  A long string of actions and legal charges against Dominion and the DEQ that have tightened their standards but not enough according to a group of student activists known as The Trillium Collective. This past summer, Dominion illegally dumped 33.7 million gallons of untreated wastewater from toxic coal ash ponds into Quantico Creek and now, these students are concerned about the accountability of both the DEQ and Dominion.

Saturday, April 23rd, The Trillium Collective held a symbolic funeral procession for the contamination of the waterway. The funeral procession started at the General Assembly, passed by Dominion's downtown office, and ended at the James river. Attendees were dressed in all black with a coffin for the James River leading the procession. Other attendees followed with art such as skull masks from the All Saints Theater Company, balls of arsenic and cadmium chained to their feet, or dead fish that read "Death by Dominion." The musicians Dharma Bombs sang hymns like "I'll Fly Away" and "The Saints Come Marching In" while others hummed or wailed in mourning. At the river, mourners shared memories and love for the the passing of the James River that ranged from stories of overcoming depression and fishing to worries for the future for our wildlife and our grandchildren.

What dreck! Other than the music, it sounds kind of like a downer. And where did they get "balls of arsenic and cadmium" to chain to their feet. That stuff is expensive! 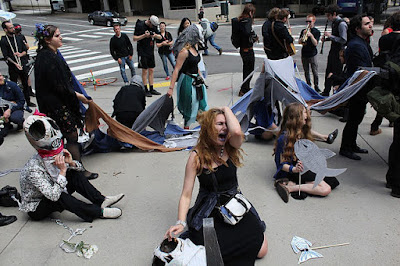 I don't think a demonstration is serious if they won't do it nude.

Trillium is  a collective of Virginia Student Environmental Coalition artists and activists, who create and organize for climate justice by combining art and direct action.

"Now that our state water is being legally contaminated we have no choice but to mobilize and inform others. The James River is no longer viable so we have to continue pressuring Dominion and our regulating bodies to improve this situation." -Aaron Tabb, VCU '17

"We wanted to have a funeral to show the gravity of the situation. The river is being killed by Dominion, and the DEQ is letting them get away with it. We chose to do it during Earth Day festivities because the holiday has become superficial, focusing on recycling and conservation without addressing the serious issues that are going to immediately damage our environment. By personifying the river as a passed loved one, we wanted to make people realize that this part of Richmond that we all love is in imminent danger." - Julian McBain, VCU '18

M own belief, formed from years of experience with the ecotoxicology and biogeochemistry of heavy metals, particularly arsenic and cadmium, is that the environment is better served by getting rid of the relatively concentrated material in the waste ponds, which are attractive nuisances to a variety of wildlife, including birds and amphibians.
Posted by Fritz at 7:36 PM