So, BA Stands for Barista?


You may not remember “Hard Times for Gender Studies Major,” a post last August featuring the lament of @Andria_XX, who had an “Honors BA in Social Justice and Peace Studies” and was pursuing a Master’s degree in Gender Studies:


“I have a honors BA and I’m defending my MA thesis in two weeks. I am also apply[ing] for jobs and I can only find stuff in the service industry. I applied for a Hotel Front Desk Clerk job today. My degrees mean NOTHING. I am at the end of my rope.” 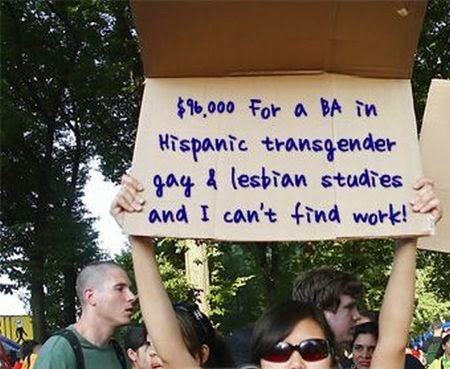 That was absolutely one of the most popular posts in the six-year history of the blog. Her advanced degrees in trendy “studies” are worthless? Gosh, maybe she should have asked somebody. That came to mind when I saw this post today at Money Runner:


The Wall Street Journal has an article bemoaning the well educated barista economy. Of course they don’t put it quite that way in their article, the subhead if which is: A new study offers an unsettling explanation of why young adults have been hit so hard.
But in the spirit of those who hailed the benefits of losing your job. Not only can you get a chance to do your own thing, but according to Nancy Pelosi, those unemployment benefits you get create more jobs. And if you lost your job becaue of ObamaCare, it’s really not a loss, but an “escape.”With that view in mind, I want to explain why college educated baristas are a net plus for the American people.
Let’s face it, modern college graduates have just left the greatest brainwashing system since the Communists invented the “re-education centers” to set their enemies right. Do you really want those budding neo-Marxists to get on the first rung of the ladder of success? 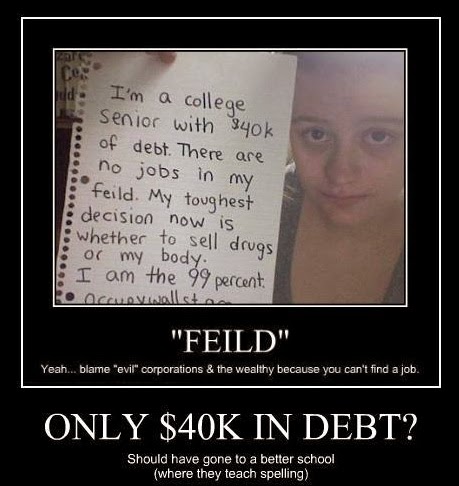 Indeed. Let them be oppressed among the toiling masses. Let them live in squalor, eating Ramen noodles and trying to figure out how they’re going to pay the electric bill and the rent and their student loans. Let them go bankrupt and suffer nervous breakdowns and, when they get out of the looney bin, let them stand beside the highway intersection holding up crudely lettered cardboard signs:

Because, hey, who says the free market isn’t efficient?

Starting in Junior High, and all the way through High School and some summer in college, I worked retail in a tropical fish store. It didn't hurt me a bit, (even though I started below the then minimum wage of $ 0.50 per hour).
Posted by Fritz at 4:12 PM