Another cool, rainy morning here. I hope the rain stops before the grass in the front yard becomes bamboo.

Obamacare continues to be as popular as ever; not very:


Gallup: “Although the Obama administration is boasting higher-than-expected enrollment for the Affordable Care Act, Americans’ attitudes toward the healthcare law have changed only marginally since the open enrollment period ended for 2014.” 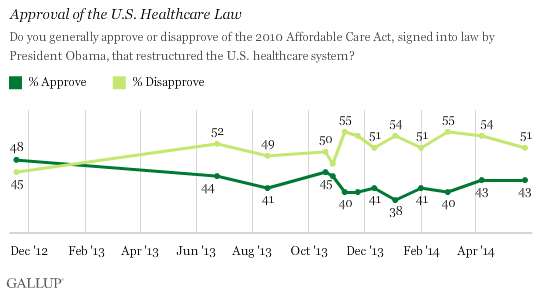 Via Wombat-sochos "Live at 5: 05.30.14", Oregon prepares to get serious about their completely non-functional website: Oregon's governor seeks to sue contractor over state's failed ObamaCare exchange


Oregon Gov. John Kitzhaber said Thursday he is seeking to file a lawsuit against the contractor who built the state’s failed ObamaCare exchange, but the company says it isn’t to blame.

The Democratic governor asked the state’s attorney general to sue Oracle Corp., the main technology contractor for Cover Oregon, for embarrassing the state and wasting money.

"This is a very serious decision taking on a very large corporation — the second-largest software corporation in the world — but I do not believe they've delivered for the state of Oregon," Kitzhaber told The Associated Press.

Oregon paid Oracle $134 million in federal funds to build what turned out to be a glitch-filled Cover Oregon website, which the state scrapped last month in favor of the federal exchange.

Oregon is the only state that still doesn't have an online portal where the general public can sign up for health insurance in one sitting through a marketplace required under ObamaCare.

Dude's, lay off the 'shrooms while writing code.
Posted by Fritz at 9:56 AM