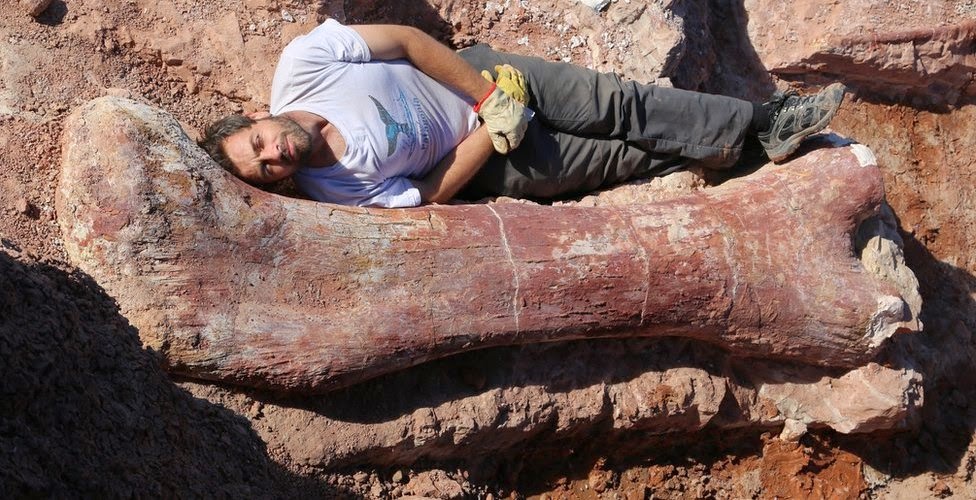 At least the biggest for now. Maybe.


Based on its huge thigh bones, it was 40m (130ft) long and 20m (65ft) tall. Weighing in at 77 tonnes, it was as heavy as 14 African elephants, and seven tonnes heavier than the previous record holder, Argentinosaurus.

Scientists believe it is a new species of titanosaur - an enormous herbivore dating from the Late Cretaceous period.

A local farm worker first stumbled on the remains in the desert near La Flecha, about 250km (135 miles) west of Trelew, Patagonia. 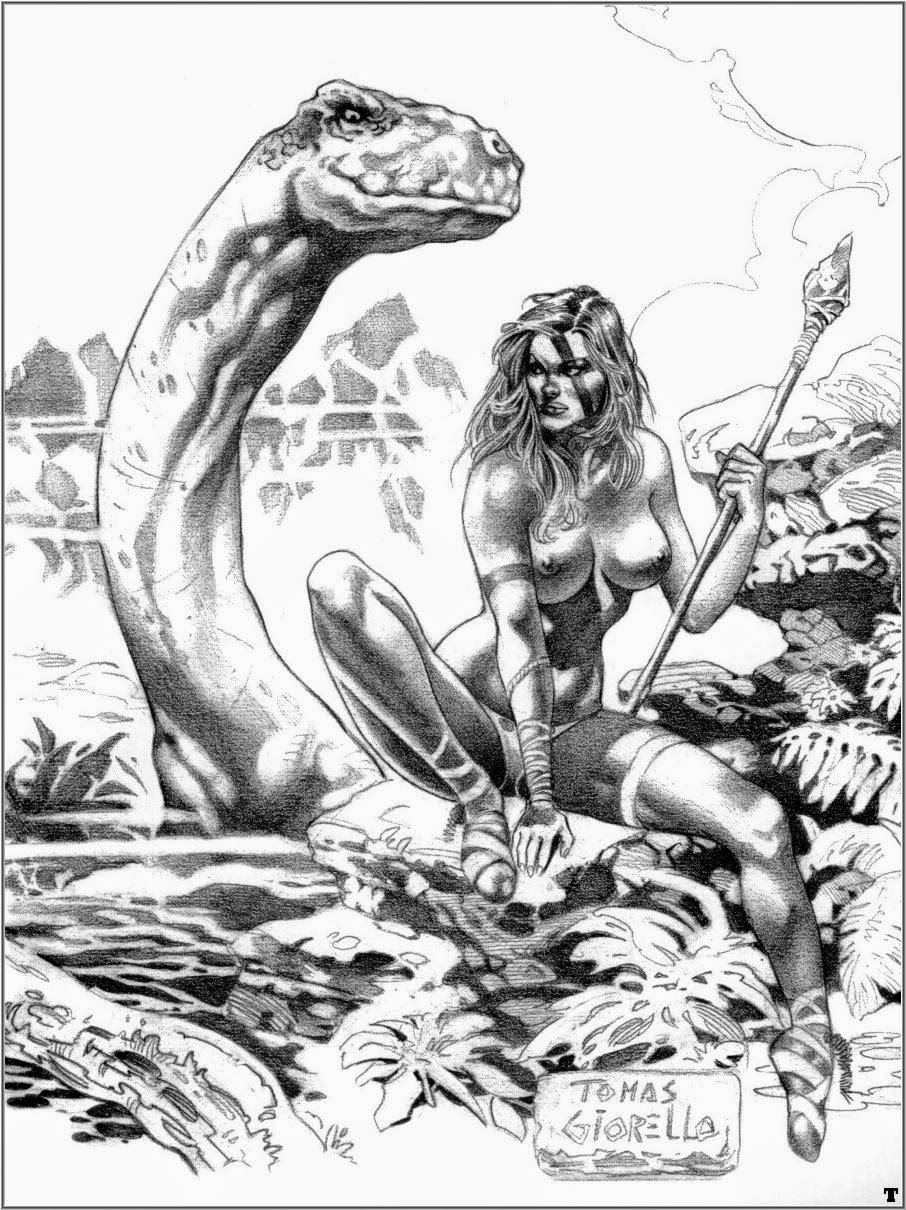 That bone would wreak havoc on a plow. How nice of the scientists to come and clear the field for them.


A film crew from the BBC Natural History Unit was there to capture the moment the scientists realised exactly how big their discovery was. By measuring the length and circumference of the largest femur (thigh bone), they calculated the animal weighed 77 tonnes.

"Given the size of these bones, which surpass any of the previously known giant animals, the new dinosaur is the largest animal known that walked on Earth," the researchers told BBC News. "Its length, from its head to the tip of its tail, was 40m. "Standing with its neck up, it was about 20m high - equal to a seven-storey building." 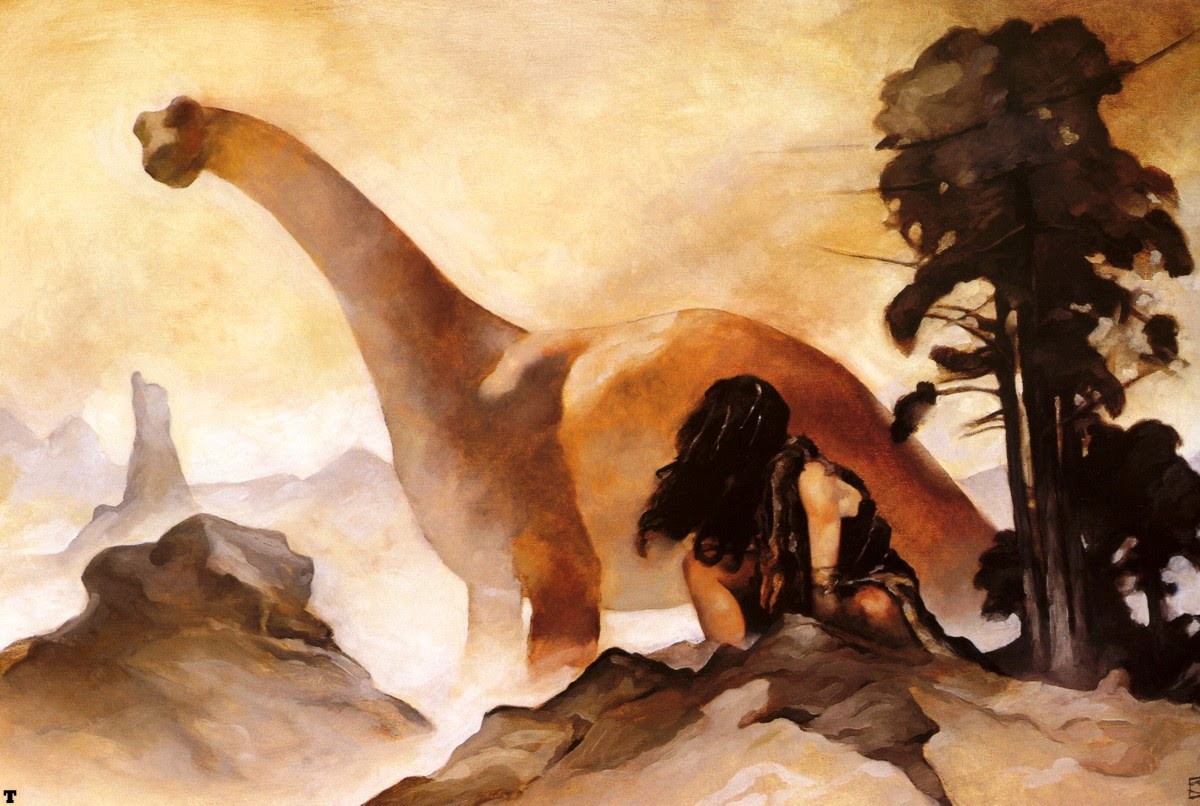 A mighty fine mount for a Dino-babe!

The most recent pretender to the throne was Argentinosaurus, a similar type of sauropod, also discovered in Patagonia.

Originally thought to weigh in at 100 tonnes, it was later revised down to about 70 tonnes - just under the 77 tonnes that this new sauropod is thought to have weighed.
The picture is muddied by the various complicated methods for estimating size and weight, based on skeletons that are usually incomplete. 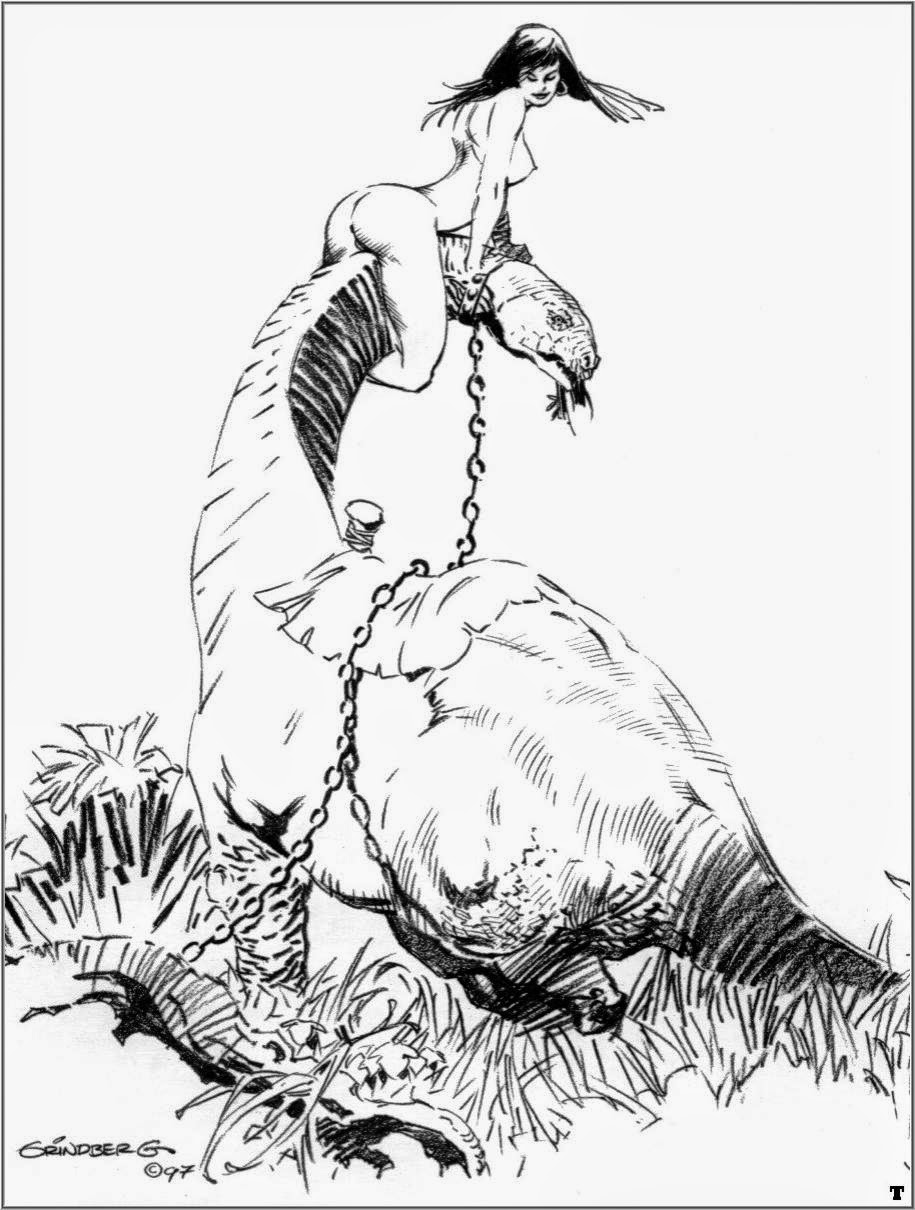 What happens when this one is revised downwards? Is every news source that ran this story going to run a revision?  I doubt it.  Biggest is funnest.  It's no fun (and therefore no story) when it turns out to be #2 or #3.

Argentinosaurus was estimated from only a few bones. But the researchers here had dozens to work with, making them more confident that they really have found "the big one". Dr Paul Barrett, a dinosaur expert from London's Natural History Museum, agreed the new species is "a genuinely big critter. But there are a number of similarly sized big sauropod thigh bones out there," he cautioned.

"Without knowing more about this current find it's difficult to be sure. One problem with assessing the weight of both Argentinosaurus and this new discovery is that they're both based on very fragmentary specimens - no complete skeleton is known, which means the animal's proportions and overall shape are conjectural. "Moreover, several different methods exist for calculating dinosaur weight (some based on overall volume, some on various limb bone measurements) and these don't always agree with each other, with large measures of uncertainty.

So, without knowing a little more about the animal than they can gather from the current fragments, it's probably bigger than the last one we discovered.

Wombat-socho has the big "Rule 5 Sunday: Memorial Day Weekend Edition" post up at The Other McCain.
Posted by Fritz at 6:00 AM