If you've been following you might know that a few weeks ago we found a tiny Black Swallowtail caterpillar living in some parsley we obtained from Charlie, and decided to try and let it grow into a butterfly, rather than disposing of it.  Two weeks ago, it made it's transformation from a caterpillar to a chrysalis, and we by chance, we caught it just as it started to change, and documented it.

The period of that a chrysalis takes to make the transformation was reputed to be about 2 weeks, and that proved to be the magic number.  Over the last several days, the chrysalis started getting darker, as the dark winged and dark bodied butterfly inside took it's final shape.

This time we missed the change.  I was in the shower when Georgia came up and reported that the butterfly had emerged (TMI?). 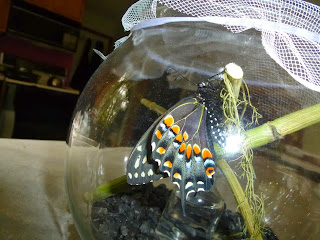 Ladies and Gentlepersons, the butterfly:


You can see the classic red and black bulls eye mark at the back of the rear wing, and the complete row of orange spots, with the doubled up spot that clearly distinguish this from the similar Spicebush  Swallowtail. 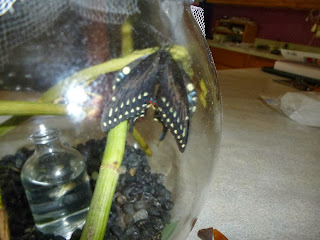 A view from the top of the wings (dorsal view for  you scientific types) shows clearly that this is female.  The male would have a much bigger and brighter row of yellow spots, and much less blue on the upper surface of the rear wings. 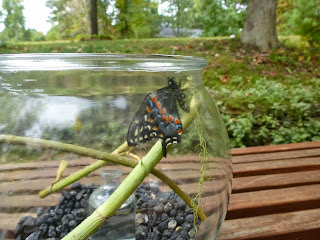 So what's next?  We took the screen off the bowl (we didn't want it flying aimlessly around the house if it emerged while we weren't around), and put it outside in the sunny side of the house, hoping it will finish hardening it's wings, and fly off, hopefully to mate, lay eggs, and leave a new generation to emerge in spring.

It chose a rather difficult day to emerge.  It's struggling to get over 60 F today, considered a minimum temperature for most butterflies to fly, in the wake of a cold front that passed through yesterday.  Hopefully, by the time it's wings have fully dried and hardened, it will be warm enough to fly off. 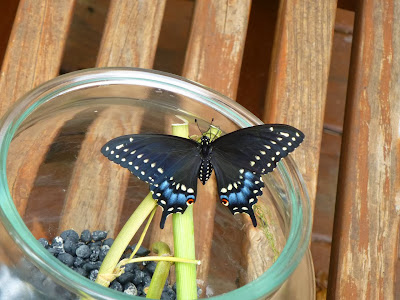 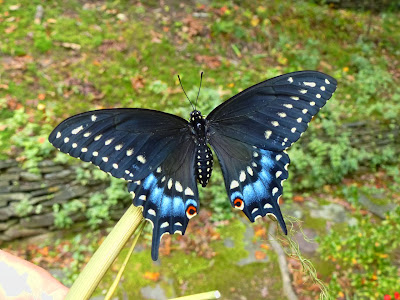 Email ThisBlogThis!Share to TwitterShare to FacebookShare to Pinterest
Labels: butterflies