Can Oysters Save Baltimore Harbor?

Probably not, but they're going to put some there anyway.


The Inner Harbor waters will soon be home to 37,500 new residents — baby oysters.

Hey, I know people who swim and fish in it now.  I personally wouldn't recommend eating too many of the fish, and I'd insist that they be cooked well.  And I have waded in it in the course of sampling.  It ain't pretty, but chances are it won't hurt a healthy person.

“If we had a clean Chesapeake Bay we wouldn’t have to do any of this stuff,” said Adam Lindquist, the Healthy Harbor coordinator for the Waterfront Partnership.

The gardens will be located at five points around the Inner Harbor: near the Rusty Scupper restaurant; near the Lightship “Chesapeake,” between Piers III and IV; between Piers IV and V; and in Fells Point.

The 75 oyster cages in the gardens will each hold 500 baby oysters, which will help clean the water as they mature over the next nine months. After they reach adulthood in June 2014, the oysters will be transported to the Fort Carroll Oyster Sanctuary. 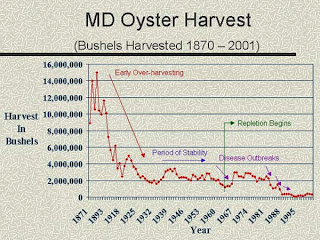 That seems like a lot of oysters, but its really not, when you consider bushel of oysters of commercial size contains 200-300 oysters, and Maryland oyster harvests once topped 14 million bushels.

It will, however, be an interesting test of the ability of oysters to survive in Baltimore Harbor.
Posted by Fritz at 6:39 PM