The state of Maryland has released the annual young of the year index for striped bass, and while the number is better than last year, it is still well below the 60-year average.

The index measures how well striped bass spawn each year in the Chesapeake Bay. Numbers were released on Friday by the Maryland Department of Natural Resources. 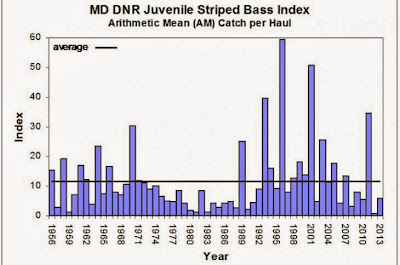 Another year, another shitty YOY report.  Looking at that graph, it looks like a pattern is emerging; a 30 or so year cycle in the Chesapeake Bay Striped Bass spawning success.  Where else is there a signal like that... 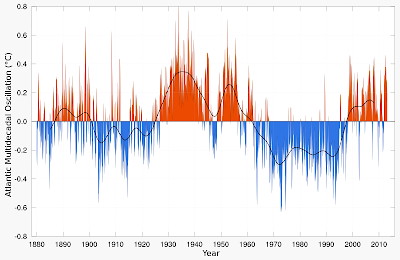 Fisheries scientists are beginning to link the AMO to the success of Stripers on the East Coast...


Here's how Wood and his team think the AMO is messing with fish food. When it's in a warm phase, springtime along the East Coast actually tends to be wet and cool — more rain, more water, more food. In the years following that phase, striper numbers tend to go up. Then the AMO flips — drier springs, less rain, less food. After a lag, it looks like striper numbers start to decline.

Wood says the past 100 years of fishing records show that very trend. And currently?

"It hasn't been so good in say the last five years," Wood says. "And it just so happens this is also the time when the Atlantic Multidecadal Oscillation seems to be switching phase."

Wood suspects it's switching into a "bad for stripers" phase, and he thinks it was also a down cycle that caused the striper crash in the 1980s. When that cycle ended, stripers recovered — not just owing to the fishing limits but because the weather bcame more favorable.

Time to start thinking of protecting the spawning stock.