New Dolphin 'Discovered' Down Under


Researchers said Tuesday that they have identified a previously unknown species of humpback dolphin living off the coast of Australia, a critical first step in efforts to conserve the dwindling numbers of the marine mammal.

Scientists from the New York-based Wildlife Conservation Society reported in the journal Molecular Ecology that they used genetic testing and physical comparison of the cetaceans to settle a long-running controversy about the number of species that exists. 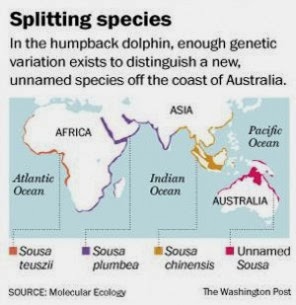 As much fun as it is to say "We discovered a new species of dolphin", what really happened here is that scientists took a group of dolphins originally lumped under one species, and split it into two, with two different names, based on minor morphological differences, and genetic evidence that the two groups do not exchange much genetic material.  Such splitting (and re-lumping) goes on often in biology.


Divided into two groups — one in the Atlantic Ocean and one found in other parts of the world — the population of humpback dolphins is actually composed of four distinct species, the researchers said. In addition to the newly discovered species, they said, one of the current groups should be divided into two. The species occupy the eastern Atlantic Ocean off West Africa, the central and western Indian Ocean, the eastern Indian and western Pacific oceans, and the waters off the coast of northern Australia.

The division of closely related groups of animals into species is inherently arbitrary. Only the dolphins know for sure.