It's Good to Have Friends...

...in Government.  But this financial adviser apparently doesn't have any. Prosecuted in DC for spent brass. 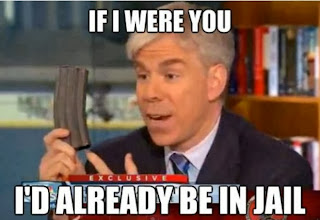 D.C. police and Atty General aggressively prosecute someone who is not David Gregory


The latest outrageous case of D.C. overreach and bullying of citizens who are not David Gregory is documented by Emily Miller at The Washington Times (via The Patriot Perspective), D.C. businessman faces two years in jail for unregistered ammunition, brass casing:


Mark Witaschek, a successful financial adviser with no criminal record, is facing two years in prison for possession of unregistered ammunition after D.C. police raided his house looking for guns. Mr. Witaschek has never had a firearm in the city, but he is being prosecuted to the full extent of the law. The trial starts on Nov. 4.

The police banged on the front door of Mr. Witaschek’s Georgetown home at 8:20 p.m. on July 7, 2012, to execute a search warrant for “firearms and ammunition … gun cleaning equipment, holsters, bullet holders and ammunition receipts.”

D.C. law requires residents to register every firearm with the police, and only registered gun owners can possess ammunition, which includes spent shells and casings. The maximum penalty for violating these laws is a $1,000 fine and a year in jail.

This appears to have been initiated by a complaint from a vengeful ex-wife (is there another kind?).


Police based their search on a charge made by Mr. Witaschek’s estranged wife, who had earlier convinced a court clerk to issue a temporary restraining order against her husband for threatening her with a gun, although a judge later found the charge to be without merit.

After entering the house, the police immediately went upstairs, pointed guns at the heads of Mr. Witaschek and his girlfriend, Bonnie Harris, and demanded they surrender, facedown and be handcuffed.

Professor Jacobson is doing the good work of keeping the pressure on the D.C. government to justify it's decision to not prosecute David Gregory for blatantly ignoring DC gun laws by brandishing a 30 round clip in Wayne LaPierre's face on national TV from the network studio in D.C despite the fact that he was warned not to.

And another fine example of governmental overreach in the name of gun control a lttle closer to home, in Shady Side, MD, via Stacy McCain:


A veteran Washington D.C. investigative journalist says the Department of Homeland Security confiscated a stack of her confidential files during a raid of her home in August — leading her to fear that a number of her sources inside the federal government have now been exposed.

In an interview with The Daily Caller, journalist Audrey Hudson revealed that the Department of Homeland Security and Maryland State Police were involved in a predawn raid of her Shady Side, Md. home on Aug. 6. . . .

At about 4:30 a.m. on Aug. 6, Hudson said officers dressed in full body armor presented a search warrant to enter the home she shares on the bay with her husband. She estimates that at least seven officers took part in the raid.

After the search began, Hudson said she was asked by an investigator with the Coast Guard Investigative Service if she was the same Audrey Hudson who had written a series of critical stories about air marshals for The Washington Times over the last decade. The Coast Guard operates under the Department of Homeland Security. . . .

It seems her husband was "ineligible" for gun ownership in Maryland because of an arrest in Prince Georges County in 1986, so they felt they needed to prevent her from possessing them as well.  It was probably just a coincidence that she was an investigative reported who had written critical stories about the Department of Homeland Security.  They just happened to seize some files containing hand written notes that identified some of her confidential sources.  Purely coincidental, I'm sure.

Oh, and the warrant did not specify the files...