Yesterday, being Sunday, there wasn't much going on with government shutdown, since the the government is normally shutdown for Sunday, and people aren't usually all that concerned about it:

On Saturday morning,  volunteers gathered to pick up trash on the mall, spurred on by the example of the lawnmower man from North Carolina.


Former Marine Ian Grinnals drove six hours from Syracuse, N.Y., to pick up trash on the National Mall as part of the “Fix Up DC” National Day of Service event on Saturday morning.

Approximately 700 attendees showed up at 10 a.m. on the West Lawn of the Capitol to clean up what 12 days of furloughed park rangers and maintenance officials have not been able to maintain.

The spontaneous community service event was organized on Thursday by FreedomWorks, Tea Party Patriots and Glenn Beck in an effort to enable citizens “to make a difference and do what government is not doing,” explained Deneen Borelli, FreedomWorks outreach director and Fox News contributor.


The big news, of course, was the veterans protesting the barrycading of the war memorials on the mall on Sunday. It's not clear to me whether anyone went through the usual channels and asked for a permit, like say pro-immigration rally last week. There are lots of links to this event; some highlights:

Veterans took the barrycades from the memorials, marched to the White House, and stacked them up in front of the fences: 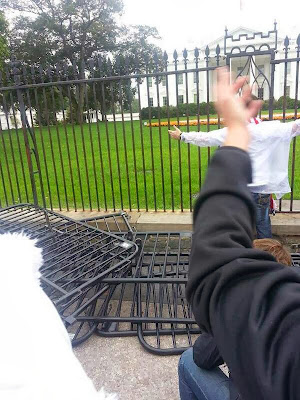 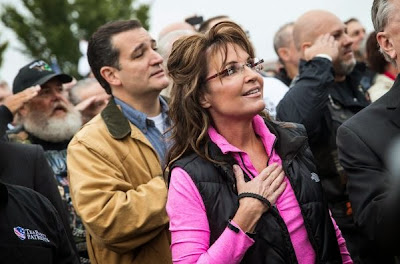 Park and Capitol Police showed up in force with armored cars, horses and  handcuffs: 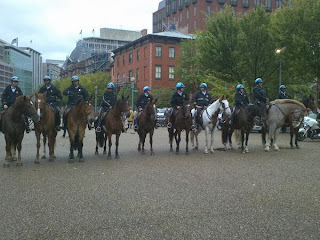 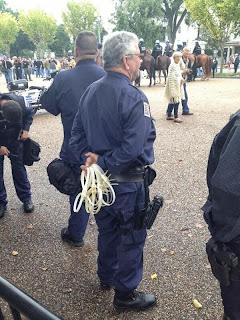 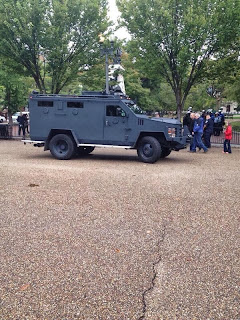 If there were any arrests, I haven't seen them reported.

The Senate was in circle jerk session yesterday, but not a lot of progress was seen:

“The discussions were substantive, and we’ll continue those discussions,” Reid said before the Senate wrapped up almost four hours of debate without a deal being unveiled. “I’m optimistic about the prospects for a positive conclusion.” Senators plan to reconvene at 2 p.m. tomorrow, and the House at noon, with no votes until 6:30 p.m.

McConnell of Kentucky issued a statement earlier saying “it’s time for Democrat leaders” to support a plan, based on one drafted by Republican Susan Collins of Maine, which Reid, of Nevada, rejected yesterday.

However, as the Washington Post reports today, Reid and McConnel can barely stand each other, having attempted to mutually interfere in each others election chances.  Hey, that's just politics, boys, get over it.