And more shockingly, admits it.

Because the "asymmetry thesis" just won't leave me alone, I decided it would be sort of interesting to see what the relationship was between a "science comprehension" scale I've been developing and political outlooks...

Except that it has the opposite sign: that is, identifying with the Tea Party correlates positively (r = 0.05, p = 0.05) with scores on the science comprehension measure: 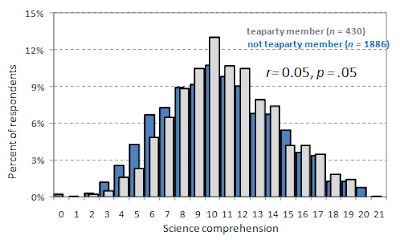 For the statistically inexperienced, the p=0.05 means the effect is likely to be found 5% of the time if the two populations (tea party and non-tea party) actually had identical distributions, through random sampling error.

Now, that's not a huge difference, but it's statistically significant by the commonly held conventions, and goes strongly against the message in the media, who tend to envision the Tea Party as barely more advanced than Neandertals, swinging clubs at all that's good and dear to civilization (and liberals).  It really shouldn't be surprising, since Tea Party members are, on the whole, wealthier and better educated than average.

Even more shockingly, he goes on to discuss his cognitive dissonance:


I've got to confess, though, I found this result surprising. As I pushed the button to run the analysis on my computer, I fully expected I'd be shown a modest negative correlation between identifying with the Tea Party and science comprehension.

But then again, I don't know a single person who identifies with the Tea Party. All my impressions come from watching cable tv -- & I don't watch Fox News very often -- and reading the "paper" (New York Times daily, plus a variety of politics-focused internet sites like Huffington Post & Politico).

I'm a little embarrassed, but mainly I'm just glad that I no longer hold this particular mistaken view.

But not really embarrassed enough to reconsider his other biases...


Of course, I still subscribe to my various political and moral assessments--all very negative-- of what I understand the "Tea Party movement" to stand for. I just no longer assume that the people who happen to hold those values are less likely than people who share my political outlooks to have acquired the sorts of knowledge and dispositions that a decent science comprehension scale measures.

and quick to find a way to minimize and dismiss the results...


Next time I collect data, too, I won't be surprised at all if the correlations between science comprehension and political ideology or identification with the Tea Party movement disappear or flip their signs. These effects are trivially small, & if I sample 2000+ people it's pretty likely any discrepancy I see will be "statistically significant" --which has precious little to do with "practically significant."

Found at Instapundit, and reinforced at Hot Air.