Did a Little More Fishing Today 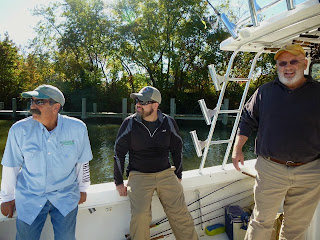 I signed up for another walk on trip with Capt. Walleye Pete, of Four Seasons Guide service.  Unlike most days, we started late, around 11 PM to avoid high winds that rolled through last night.  There were five fishermen besides Pete Here, Joe, Brett and Doc.  Mike not pictured. 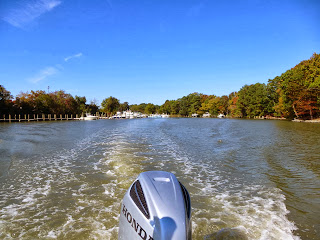 Leaving Buzz's Marina about 11.  It was rough crossing the bay in a 10-15 knot northwest wind. 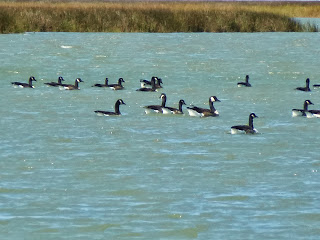 Fall on the Eastern side.  A large gaggle of Canada Geese were holed up in one of the tidal creeks of Bloodsworth Island.  The grass is getting brown. 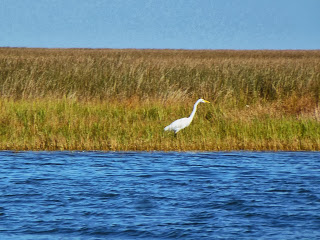 Fishing was tough.  The water was a little murky, after the wind with about 1 ft of visibility.  We caught a few fish in the skinny water, here and there.  Most points were only good for one or two fish, all stripers, and few keepers (>18 inches among them). 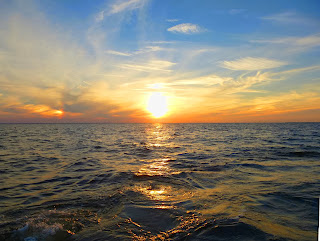 Late in the afternoon, the wind died, and we left the islands of the shore to try out in the bay, in an area called the Middle Grounds.   Here, on some structure, the fish were stacked up pretty good.  We caught quite a lot of Striped Bass, some nice sized Bluefish, and... 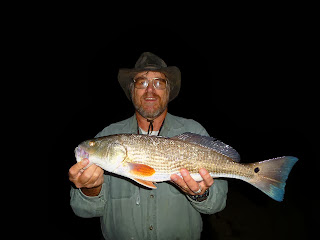 I got lucky and got the one Red Drum (aka Redfish, aka Channel Bass) for the day here. My first legal, and tomorrows dinner. 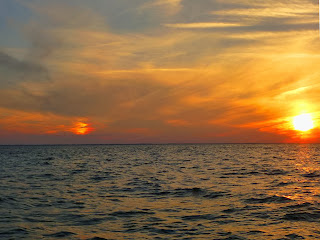 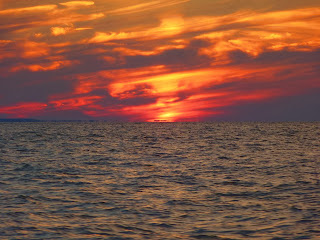 Sunset over the middle grounds.  The sun is at the right of the photo, and the bright spot on the left is a "sun dog." At times, there were sun dogs on both sides of the sun, but the left was always much brighter.  You can also see it, and the accompanying arc in the sunset photo above.

It was one of the brighter sunsets I've seen this year. 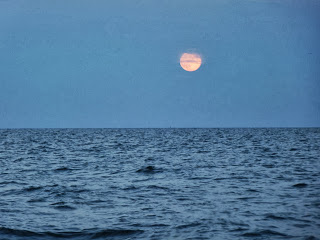 It's also a full moon, which came up while the sun was setting. 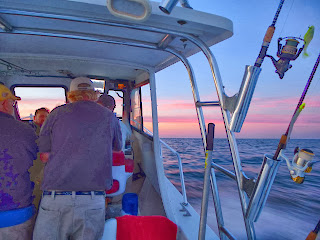 In the past several days, I noticed that Google is screwing with photos, enhancing and or sharpening the photos to make them more "interesting", a process I prefer to do manually.  In this photo you can see it's over saturated and produced blotches in Mike's shirt.  I'm going to have to find a way to turn it off, or find a new way to host the pictures.
Posted by Fritz at 10:48 PM