Reign of Pain - "Nobody Knows the Trouble I've Seen"

Day 15 or so of the the 2013 Obama/Reid government strike.  There appears to be movement of afoot in the US Senate to end the stalemate:


The framework under consideration includes only minor changes to President Obama’s signature health-care law, falling well short of defunding it or delaying major provisions as conservative Republicans initially sought. Instead, Republicans would get only new safeguards to ensure that people who receive federal subsidies to purchase health insurance under the law are eligible to receive them.

But talks were hung up over another provision, aides and lawmakers said: a demand by Democrats to delay the law’s “belly button tax,” a levy on existing policies that is set to add $63 per covered person — including spouses and dependents — to the cost of health insurance next year. Republicans derided the proposal as a special favor to organized labor.

Meanwhile, Democrats were resisting a GOP demand to deny Treasury Secretary Jack Lew the use of special measures to extend his borrowing power past Feb. 7. That would give Congress a firm deadline for the next debt-limit increase, with no wiggle room for Treasury Department accountants.

"Belly button"  tax?  I never heard of it.  Does that make Karolina Kurkova exempt?  Hers isn't really missing, though, it's just sort of ambiguous.

Those nasty Republicans, insisting that belly buttons be taxed, and that would be health care free loaders be screened out.

Paul Ryan reported that the House Republicans were still holding out for a 1 year delay in the personal Obamacare mandate, to match the presidential decree of one for big business:

President Obama, said Ryan, listened but declined to respond. In the meantime, Ryan said, it became clear the president was negotiating separately to obtain more favorable terms from Senate Republicans, trying to "jam" the House Republicans in the process. Ryan told Sykes that Obama and Senate Majority Leader Harry Reid had "overplayed their hand" in attempting to prolong the crisis to maximize political damage to Republicans.


I should have included this one yesterday.  Rand Paul telling a fat cow Candy Crowley that Democrats may have overplayed their hand.


Senator Rand Paul (R-KY) appeared on CNN’s State of the Union Sunday morning and told host Candy Crowley that the Democrats were overplaying their hand in the showdown over government funding.

“We need to open up government,” Paul said. “And it does require conversation. But the president is the one saying he won’t negotiate. And now it’s Senate Democrats saying we used to want to clean C.R. but we think you’re squirming, so now we want to raise spending and break the budget caps. So I think we’re seeing the Senate Democrats are getting greedy about this whole thing.”


Mark Steyn's scorching of the attempt to use the Park Service, National Parks and Monuments is a must read: Park Service Paramilitaries


...But the one place where a full-scale shutdown is being enforced is in America’s alleged “National Park Service,” a term of art that covers everything from canyons and glaciers to war memorials and historic taverns. The NPS has spent the last two weeks behaving as the paramilitary wing of the DNC, expending more resources in trying to close down open-air, unfenced areas than it would normally do in keeping them open. It began with the war memorials on the National Mall — that’s to say, stone monuments on pieces of grass under blue sky. It’s the equivalent of my New Hampshire town government shutting down and deciding therefore to ring the Civil War statue on the village common with yellow police tape and barricades...

Ace reminds us:  Don't Forget...The Democrats Have Some Demands And Are "Taking Hostages"


Naturally the media narrative is that only the GOP has any demands in the shutdown/debt ceiling fight but that's far from the truth.

The supposed deal that Republican Senators were tossing around this weekend was killed mainly because it kept the current sequester levels of spending in place.

There are a lot of things you can say about Ezra Klein (like his stunning lack of self-awareness) but at least he's honest: Democrats don't want a six month CR because that means they won't have the chance to bump up spending.

This is one of my major bones to pick.  It's quite acceptable in the media to be comparing Republicans and conservatives as "terrorists", "hostage takers", even "anti-American." The president uses such rhetoric, the Democratic leaders use it, and the media use it. People on the street, or worse, even of the beach, feel free to use it.  It's not an argument, it's an ad hominem. 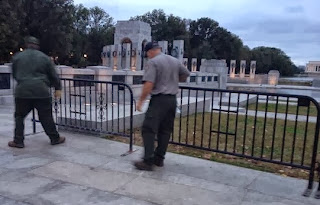 Park Service: Too broke to let you use eyes to see national monuments, but still enough cash to pay people to put barriers back up after Million Vet March

Without the appearance of control, they're nothing.


And the outrage of the weekend?  The administration still locking Catholic priests out of religious services.


The Obama Administration shut down Catholic Services at the Kings Bay Naval Submarine Base in Georgia. The church was also locked down.

In the wake of the government shutdown, despite provisions in the Pay Our Military Act, Catholics at Kings Bay Naval Submarine Base in Georgia are being denied religious services. The Catholic priest who serves this community has been prohibited from even volunteering to celebrate Holy Mass without pay, and was told that if he violated that order, he could be subject to arrest. Protestant services continue to take place. Only Catholic services have been shutdown.

And now a word from Louis Armstrong: