Reign of Pain Requiem - US Takes on One Day Record Debt

The Feds borrowed a third of a trillion dollars in your name yesterday, the first day they could borrow again, after months of playing games with the books to avoid the necessity of take more, and after 17 days of the government shutdown.


U.S. debt jumped a record $328 billion on Thursday, the first day the federal government was able to borrow money under the deal President Obama and Congress sealed this week.

The debt now equals $17.075 trillion, according to figures the Treasury Department posted online on Friday. 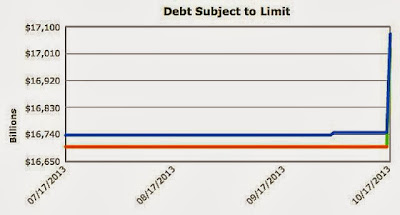