One of the alleged symptoms of Catastrophic Anthropogenic Global Warming is supposed to be more rapid warming at the planets poles.  This is, at least one the first glance, a reasonable hypothesis because the polar regions act as the earth's radiators.  Excess heat accumulating in the equatorial and temperate areas is transported by winds and ocean currents to the poles, where it is radiated into space (that's the quick summary, the details are, of course, much more complicated).

However, this year, the Arctic region, at least, seems to be getting relatively little heat, and as a result, the region above 80 N has experienced the shortest and coldest summer since data started being recorded in 1958.

Going to the Sea Ice page at WUWT, and clicking through to the Danish Meteorological Institute that keeps the data we see: 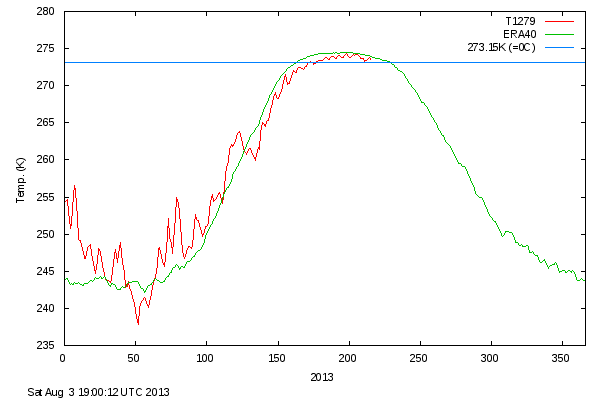 In 2013, we have a delayed thaw, barely reached average summer temperatures, and what appears to be the start of an early freeze.

The other cool thing about the Danish site is that you can look at the comparable data for every year since 1958, and indeed, this summer seems to be a definite anomaly in the collection.