Sunspot cycle 24, the current cycle, continues to under perform previous expectations.  Once predicted to be the most active cycle recorded, it is now expected to have reached it's high point already, well below other recent cycles.  A possible second peak also possible (recent cycles have shown a distinctive double hump).

Historical sunspot cycles back to the beginning of official records of regular observations are shown below: 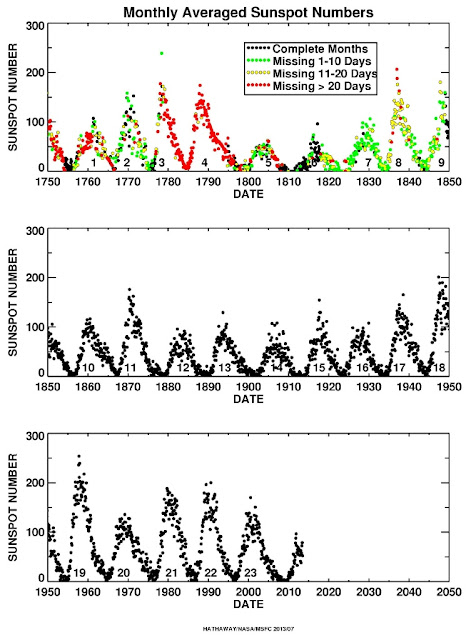 An even longer time course, reaching back past the "Maunder Minimum":

Early records of sunspots indicate that the Sun went through a period of inactivity in the late 17th century. Very few sunspots were seen on the Sun from about 1645 to 1715 (38 kb JPEG image). Although the observations were not as extensive as in later years, the Sun was in fact well observed during this time and this lack of sunspots is well documented. This period of solar inactivity also corresponds to a climatic period called the "Little Ice Age" when rivers that are normally ice-free froze and snow fields remained year-round at lower altitudes. There is evidence that the Sun has had similar periods of inactivity in the more distant past. The connection between solar activity and terrestrial climate is an area of on-going research.

Does this mean that we'll be expecting to walk across the Chesapeake Bay or ice fish for Striped Bass any time soon?  Stay tuned.
Posted by Fritz at 9:38 AM