As I said before, it's one thing to screw with the soft Western democracies, it's another altogether to challenge the Islamic militant governments on their own ground with bare breasts:

Three members of a radical Ukrainian feminist group have been expelled from Tunisia on suspicion of planning a topless protest in front of the court where their colleagues were being tried on charges of public indecency, the interior ministry said on Wednesday.

The statement on the Ukrainian ministry's Facebook page said information had led to one individual being taken to the country's main airport on Tuesday, while a Belarusian was stopped there the same day. Another Ukrainian was turned back on Wednesday at the airport. 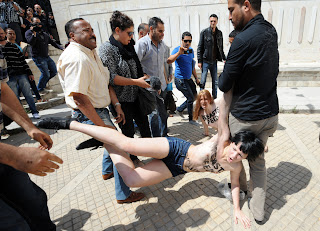 The United States should throw back a few Muslim thought to be engaged in extremist activities as a response.

Three fellow activists from the group, Femen, are on trial for public indecency after demonstrating topless in front of Tunisia's Palace of Justice. They were calling for the release of a Tunisian member of the group.

The trial began on Wednesday with lawyers representing several Islamist groups petitioning to delay the trial so they could join as plaintiffs. The judge adjourned the session and said he would make his decision on 12 June. 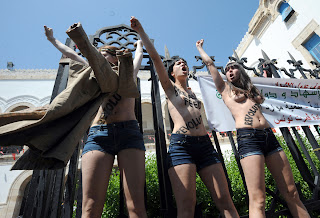 From another article, I understand that the possible sentence if convicted is up to year in whatever paradise jail is in Tunisia.

The activists, Pauline Hillier and Marguerite Stern from France, and Josephine Markmann from Germany, appeared topless on 29 May in the group's first semi-nude protest in the Middle East.

They have been charged with public indecency and being a threat to public order.

Wombat-Socho's Rule 5 Sunday at the Other McCain came on Monday this week.
Posted by Fritz at 9:24 AM