My Day in the Salt Marsh 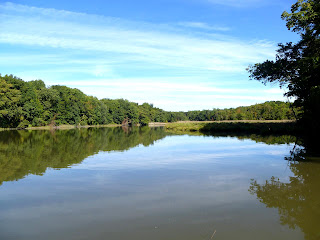 I spent most of my day shepherding a film crew around in a salt marsh, with occasional stops to be provide dialog and footage for what I hope will be a reasonable documentary.  I carried the camera, so I got a few shots...

Looking up Muddy Creek.  Well named I might add. 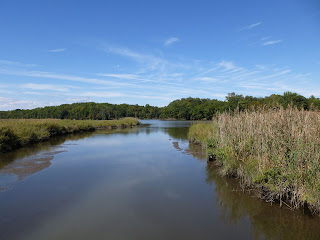 A different, much smaller tidal creek.  Note the salt marsh grass, Spartina, on the left side and much taller Common Reed, Phragmites, on the right, almost certainly the "bad" invasive Phrag and not the native "good" Phrag. 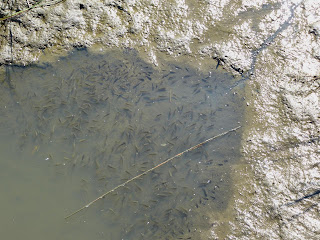 We were there at low tide and the water was a long way out, and the minnows, mostly Mummichogs, (Fundulus heteroclitus) were concentrated in the shallows.  Out in the creek, there were some predators attacking them once in a while, with a lot of splash.  I caught a few glimpses of the predator, but not enough to ID it.  Reasonable guesses include Largemouth Bass, Yellow or White Perch and Chain Pickerel. 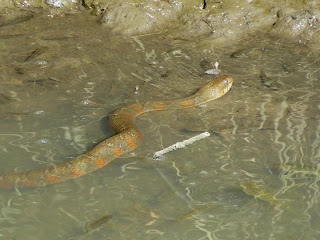 Not the worst way to spend a day.  I could have skipped the part where the dock broke, though.
Posted by Fritz at 8:29 PM