Washington DC Going to the Dogs 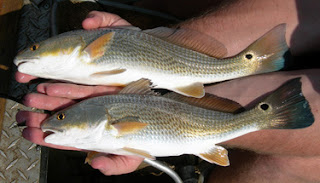 "I was in Pohick Bay with a buddy last week, and we were all of a sudden surrounded by these fish. Big waves of fish (were) coming toward us and we were looking and it was kind of diminished light, we couldn't see really well," says Potomac River bass fishing guide Steve Chaconas.

"But when we got a good look, we said 'those look like redfish.' And then we started asking around, and we found that yeah, people are catching redfish here in the Potomac River."

The redfish, also known as red drum or puppy drum, is a popular sport fish living in both saltwater and brackish water. They're silvery colored with a spot near the tail.

"When you do mention redfish in the Potomac River to any angler, they get excited. That's a species that fights really hard, fights much harder than any of the native species that we have here in the Potomac. It adds excitement to the guys who will travel to try to catch these fish. Where they would normally have to go to the Chesapeake Bay or go somewhere around saltwater, now they can just come right here in their backyard," says Chaconas.

Red Drum (Sciaenops ocellatus) are regular summertime visitors to Chesapeake Bay, although we are on the northern end of their range.  Large ones (3-4 feet are regularly caught in spring around salt marsh islands in lower and middle Bay.  Smaller "Puppy" drum are more often seen further up the bay in late summer or early fall (say about now).  I've seen a few caught at "Location X" down through the years, and I've seen even more caught by beach anglers on our beach.  Many of them don't recognize the fish, and confuse them with Atlantic Croaker or Norfolk Spot, not a particularly bad guess as they are all members of the Sciaenidae (Drum) family with similar body shapes.  However, the fishing regulations are much different.  Red Drum must be between 18 and 27 inches to keep, with a limit of 1, while croaker need only be 9 inches and spot have no limit.
The smaller, late summer migrants rarely make that lower size limit.

It's always exciting when a rare one shows up in good numbers, though, as it is a sign that their population is potentially expanding into the area.  Of course, we'll probably have a wet cold year next year, and they'll stay further south.
Posted by Fritz at 6:39 PM