A record catch for an unwelcome fish

An angler has hooked a record blue catfish in the Potomac River, but for wildlife specialists, this is not particularly good news — not because the big fish was caught, but because it was there.

The fish weighed 84 pounds and measured 52 inches long, with a 36.5-inch girth. But the blue catfish is an outsider in the waters of the Washington region, and for all its imposing size, not an especially welcome one.

As you may remember from past posts (1, 2, 3, or 4, or even somewhere else, God forbid), the Blue Catfish is a species of catfish native to the Mississippi River system, but not to rivers on the East Coast of the US.  It's introduction, either deliberately or accidentally, has been a source of considerable concern to fisheries managers, who fear it will out compete the native catfish, and potentially deplete the prey they feed on.


Jones, who landed the record catfish and his guide, Josh Fitchett, of Montpelier, Va., kept it alive and took it to the Fort Washington Marina for weighing and certification.

Then it was tagged and returned alive to the Potomac near where it was caught. The tag and release was part of a study of invasive species being carried out by Maryland and Virginia fisheries biologists.

In general, while releasing fish after catching them is often encouraged, DNR officials discourage the practice when it comes to blue catfish. 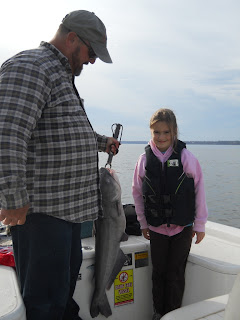 On the other hand, fishing guides have made the giant blue cats into a significant  sports fishery, and while fisheries research is in the works to attempt to document the possible damage they have been doing to the ecosystem, at this point, the negative effects of the Blue Catfish are purely speculative.

So maybe I'll catch this giant, a few pounds bigger, the next time I go fishing with Capt. Mike.
Posted by Fritz at 7:00 PM