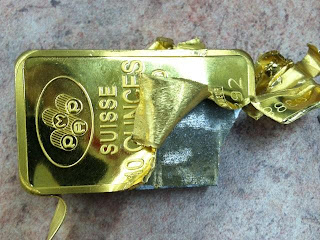 ...Is Not Gold:  Fake Gold Bars Found in New York


In jewelry stores on 47th Street and Fifth Avenue in Manhattan, the important trust between merchants has been violated. A 10-ounce gold bar costing nearly $18,000 turned out to be a counterfeit. The bar was filled with tungsten, which weighs nearly the same as gold but costs just over a dollar an ounce.

Ibrahim Fadl bought the bar from a merchant who has sold him real gold before. But he heard counterfeit gold bars were going around, so he drilled into several of his gold bars worth $100,000 and saw gray tungsten -- not gold.

What makes it so devious is a real gold bar is purchased with the serial numbers and papers, then it is hollowed out, the gold is sold, the tungsten is put in, then the bar is closed up. That is a sophisticated operation.

Raymond Nessim, CEO Manfra, Tordell & Brookes, said he has reported the situation to the FBI and Secret Service.

The Secret Service, which deals with counterfeits, said it is investigating.

Back in March, I reported similar tampering going on where gold bars in England had part of their mass replaced with tungsten rods.  This example seems to be even worse, with the gold bars all but emptied of gold, and completely filled with tungsten.  Moreover, whoever is committing the crime seems to have infiltrated what would have been expected to have been a reliable supply chain.

If you are interested in holding gold metal as a hedge against economic issues, you need to be aware of this possibility and take steps to make sure you don't fall for doctored bullion.
Posted by Fritz at 5:00 AM