Not a Good Day or Two for US

Frankly, one of the worst in some time.

First, the US Embassy in Egypt was attacked by a mob early on 9/11. Egyptian troops and police failed to stop the protestors from scaling the walls, ripping down and burning the US flag.  The ostensible reason for the attack was an anti-Muslim film made by "Sam Bacille", an allegedly Israeli -American director.  In fact, his identity is in doubt.  There is considerable suspicion that the attack had been planned in advance and would have occurred with or without the film, in conjunction with the 11th anniversery of the 9/11 attacks

The US Embassy in Cairo responded with a statement seeming to decry the actions of the protestors but sympathizing with their complaints regarding the anti-Muslim film:


"the continuing efforts by misguided individuals to hurt the religious feelings of Muslims -- as we condemn efforts to offend believers of all religions." 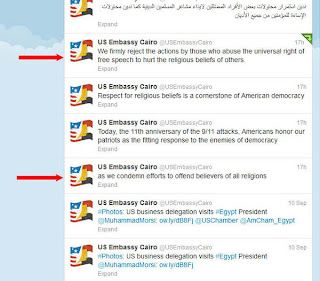 After many protests that the US government had no business attacking free speech in the US, the State Department deleted the Tweet (but as you may be aware, nothing ever disappears from the internet).

A University of Pennsylvania professor, Dr. Anthea Butler called for the arrest and imprisonment of "Sam Bacile".  Free speech?  What free speech?

Then Mitt Romney attacked the Administration for permitting this attack on free speech by the State Department:


"It's disgraceful that the Obama administration's first response was not to condemn attacks on our diplomatic missions, but to sympathize with those who waged the attacks."

The Obama  administration responded by accusing Romney of attempting to politicize the issue:


"We are shocked that, at a time when the United States of America is confronting the tragic death of one of our diplomatic officers in Libya, Gov. Romney would choose to launch a political attack."

Early this morning another, possibly coordinate mob, attacked the US embassy in Benghazi, Libya was attacked.  The resident ambassador Christopher Stevens, and three other Americans, including at least one defending marine were killed.  Ambassador Stevens body was reportedly dragged through the street (well, there are pictures):


“Frankly, we are not clear on the circumstances between the time he got separated from the group inside the burning building, to the time we were notified he was in Benghazi hospital,” a senior administration official who spoke on condition of anonymity told reporters. “We were not able to see him until his body was returned to us at the airport.”

Whitehouse logs suggested that Obama had not received any intelligence briefings in the past week, although he had time to go on the Letterman show.  Note that he also snubbed Benjamin Netenyahu, who asked for a meeting with Obama over the smouldering crisis regarding Iran's development of atomic bombs.

Obama and Secretary of State Hillary Clinton issued statements that could at best be described as boiler-plate.

Reporters at a Mitt Romney press conference were caught on a hot mike conspiring to coordinate questions "regardless of who asks them".  But no bias, I'm sure...

Sadly, that's about the state of the facts at this point. Protests in Cairo persist. Much more to come, I'm sure.
Posted by Fritz at 8:32 PM