Dolphins in the Bay Now and Then 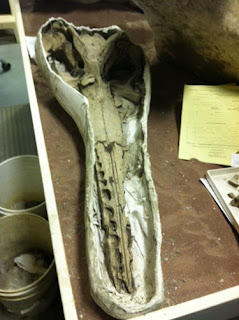 
Millions of years ago, Washington D.C. was beachfront property along the Atlantic Ocean, and much of our region was underwater.

A fascinating fossil from that time was found earlier this year on a beach along the Calvert Cliffs in Maryland and is now at the Calvert Marine Museum. It's a skull, almost 3-feet-long, of an extinct dolphin with a long, thin snout.

The museum's curator of paleontology, Stephen Godfrey, says an amateur collector made the discovery in an area normally covered by water.

"The weather conditions were right so that the water in the Chesapeake Bay was very low. Both a high pressure system has pushed the water out, and the winds were blowing from the right [direction], so there was a very wide section of beach that was exposed," says Godfrey.

The skull is about the size of a modern day killer whale skull, and Godfrey says this particular dolphin could be considered a great great grandfather of the killer whale.

We've had dolphin skulls come out of the cliffs near us before.  Down at the far end of our walk the museum excavated one out the cliffs about 3-4 years ago (I could figure it out if I went and sorted though my pictures; they left a big hole).  They're very cagey here not to give out too much information about where it was but my guess is it was further south:

"We're very fortunate here at the Marine Museum because the sediments that entombed these fossils did not cement. When you think of people excavating for dinosaur bones, often you'll see them using jackhammers or dynamite, other kinds of power tools, air scribes that are like little jackhammers driven by compressed air," Godfrey says.

"For the most part, we don't have to use any of those pieces of equipment because ... the individual little grains of sand and silt were not cemented together naturally. They're still essentially like they were when they were laid down, and so we can just use our fingernail to actually dig through the sediment. For the most part, it's that soft. So as to not get dirt under your fingernails, what we typically use are dental scalers and brushes. And so the scalers are donated to use by local dentists," he adds.

Up here, below the waterline it isn't very far down before you run into a hard gray clay.  There's a lot of loose sand above it though, and the strata dip towards the south, so my guess is somewhere down by the Ranch Club.

And the now?  My next door neighbors saw a pod of dolphins go by down at our beach yesterday.  Unusual, but not really unheard of.  I've seen them a couple time.
Posted by Fritz at 7:26 PM