Previous research had shown that today's Icelandic arctic foxes belong to one of five groups.

But when Dr Greger Larson from the Durham University and colleagues analysed DNA from 1000-year-old fox bones from archaeological sites across Iceland, they discovered that all the ancient foxes descent from just one of the five groups. 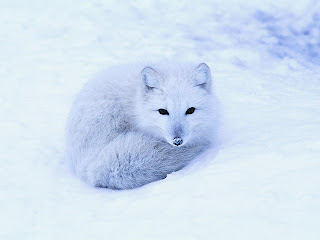 This means the other four groups must've arrived at some point in the last millennium.

"Must've?" Seriously?  That's the quality of science writing today?  Most of us use must've in colloquial speech, but I don't (excuse me, do not) think I've ever seen it in print before!

The only plausible explanation, says Larson is that a bridge of sea ice must have formed during a dip in temperatures between 200 to 500 years ago. This would have let new foxes find their way to Iceland from different Arctic regions, including Russia, North America and Greenland.

Dang, it must have been mighty cold back then to get the Arctic to freeze up to the point that foxes could trot from Europe, Greenland or North America?  You mean to tell me that the ice comes and goes without CO2 to drive it?  Anthony Watts will be amused with that notion.


Luckily, excavations of the remains of 17 arctic foxes from two late ninth-to-twelfth century archaeological sites in northeast Iceland gave the team of researchers from the UK, Sweden and the US the perfect opportunity to investigate.

'We found that what explains today's genetic structure in Iceland has to be migration. You've only got to have a couple of females making their way to the island every year for 500 years and that's enough to change their genetics,' explains Larson.

He and his colleagues think the Little Ice Age would have connected Iceland and Greenland for several months a year.

'You'd probably have foxes knocking on the door of Iceland the whole time and as soon as the ice bridge formed, bang they're there.'