Feds Stop Use of Ships as Artificial Reefs

The U.S. Maritime Administration has adopted new rules that, for now, effectively end a high-profile program for getting rid of old ships by making them into artificial reefs.

The federal agency once trumpeted its reefing program as an environmentally responsible alternative for disposing of junk behemoths by stripping them down and sinking them offshore, where they often became popular destinations for fishermen and divers.

Several unwanted ships owned by the agency - including two from the James River Reserve Fleet, better known as the "ghost fleet" - were converted into metallic reefs after being prepared and purged of toxic innards at local shipyards.

But the Maritime Administration recently changed two standards that, taken together, removed all remaining junk ships as possible reef candidates.

...Chief among the changes is a rule that all ships built before 1985 no longer can be sunk as reefs. The rule is targeted at curtailing PCBs, a highly toxic class of chemicals that, before 1985, often were found in ship wiring, insulation, gaskets and paint. 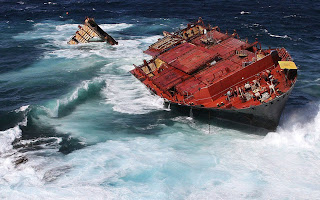 Hmm, I don't care much whether old ships are dismantled for scrap or sunk as fishing reefs; no ships will likely be sunk where it will do me any good as a fishing spot, but I would hope that the action is being taken for the right reason.  If older ship cannot truly be cleaned of the PCB used in them, fine, just scrap them.  But I have a sneaking suspicion that it's just a pretext, that old hulks would, in fact, be stripped clean enough of PCB containing materials before being sunk. A quick check shows that paints have been found to be contaminated with PCBs, but the levels were relatively low, about 0.1 part per million, as a result of side reactions in the pigment manufacture.   Moreover, PCBs are volatile, and concentrations remaining in the paint after many years is doubtless much reduced.

Meanwhile, ships will continue to sink around the world, and PCBs will be somewhere near the bottom of peoples concerns about them.
Posted by Fritz at 6:58 PM