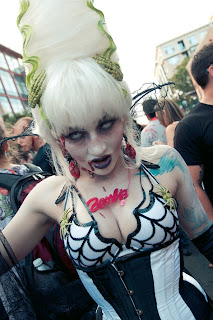 Forget the H1N1 pandemic. Could a future crisis arise from an outbreak of viruses that destroy brain cells and render people violently catatonic, like zombies?

The far-fetched scenario of a government grappling a zombielike threat — think movies like “Night of the Living Dead” or, more comically, “Zombieland” — has captured the attention and imagination of Brad Barker, president of the security firm HALO Corp.

Next month, his outfit will incorporate — no kidding — zombies into a disaster-crisis scenario at the company’s annual Counter-Terrorism Summit in San Diego, a five-day event providing hands-on training, realistic demonstrations, lectures and classes geared to more than 1,000 military personnel, law enforcement officials, medical experts, and state and federal government workers. 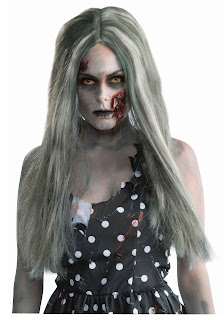 How can you tell a government worker from a zombie?

The zombie wants a brain.

HALO will take over the 44-acre Paradise Point resort in the city’s popular Mission Bay and create a series of terrorist scenarios, with immersive Hollywood sets including a Middle Eastern village and a pirates’ haven. Retired Air Force Gen. Michael Hayden, a former CIA and National Security Agency director, and Mexico Interior Secretary Alejandro Poiré Romero will speak during the summit, which runs Oct. 30 to Nov. 2.

Barker calls the scenario “Zombie Apocalypse.” That phrase took off last year after the Centers for Disease Control and Prevention unveiled a campaign aimed at underscoring the importance of being prepared for major emergencies, natural disasters and pandemics. 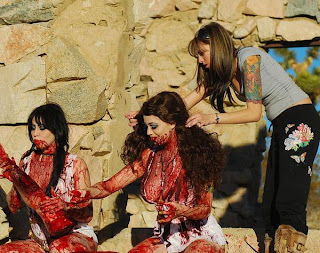 In the CDC’s Preparedness 101 program, fictional zombies are used to drive home the message that Americans must be ready for any emergency — even the kind that, hypothetically, could stem from a brain-eating virus pandemic. Zombies also star in a 40-page comic book the CDC published, a tongue-in-cheek take on the serious scenario of a mutated virus that quickly spreads as the government dispatches its military to maintain order while infectious disease specialists scour for a vaccine. 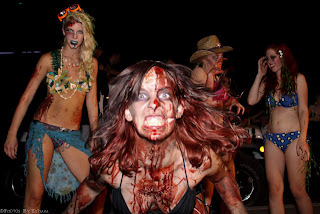 So, what sort of civil right do zombies get?  Habeas corpus?

Naturally, Navy Times got in on the fun, too, publishing a lighthearted “zombie war deployment guide” in the Aug. 1, 2011, issue. The story examined various tactics and gear that “experts” consider essential to wage a successful campaign on the undead.

“The Zombie Apocalypse is very whimsical,” Barker said, noting the setting is intended to add some levity to the more dire scenarios summit goers will encounter — incidents depicting active shooters inside a hospital or downed pilots trapped behind enemy lines, for instance. The pandemic medical nightmare is bound to be an attention-getter among people attending the summit.

Hopefully they'll be in costume, and put a few pictures on the web; I'm running low on good material.
Posted by Fritz at 6:00 AM