Russia's North-Eastern Federal University said an international team of researchers had discovered mammoth hair, soft tissues and bone marrow some 328 feet (100 meters) underground during a summer expedition in the northeastern province of Yakutia.

Expedition chief Semyon Grigoryev said Korean scientists with the team had set a goal of finding living cells in the hope of cloning a mammoth. Scientists have previously found bones and fragments but not living cells.

Mr Grigoryev told the online newspaper Vzglyad it would take months of research to determine whether they have indeed found the cells.

"Only after thorough laboratory research it will be known whether these are living cells or not," he said, adding that would take until the end of the year at the earliest.

Woolly mammoths are thought to have died out around 10,000 years ago, although scientists think small groups of them lived longer in Alaska and on Russia's Wrangel Island off the Siberian coast.

I reported on this attempt to resurrect the Wooly Mammoth earlier.  The advance here appears to be the finding of fresher tissue than previously found, which raises the possibility of getting living stem cells which could conceivably be planted into ova from modern elephants, to clone a mammoth much the way Dolly the Sheep was cloned.  Having Wooly Mammoths around would be cool; we should turn them loose in Central Park.

Still no word on whether they plan to resurrect the Cave Girl (shown here with her oxymoronic dwarf mammoth from Wrangel Island): 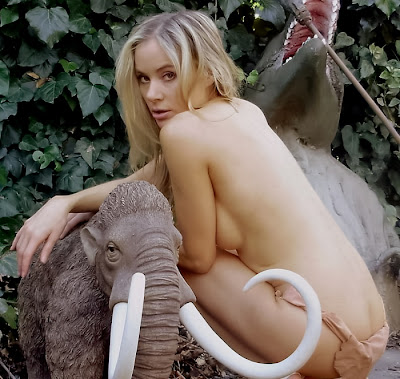 Thanks to GatorDoug for listing this in his vacation version of Rule 5 Roundup featuring Nana Ogura. Wombat-Socho gets the second link with The Other McCain's weekly Rule 5 Review "No-Frills, Rule 5 Sunday". Linked in The Classical Liberal "Rule 5 Gold!"
Posted by Fritz at 6:00 AM