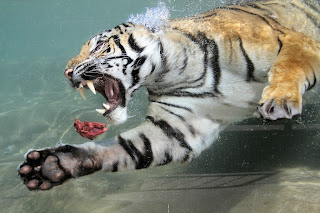 Mauled NY man: I wanted to be one with the tiger

But it's idea was to put him in it's stomach:


Before his now-infamous tangle with a Bronx Zoo tiger, David Villalobos adorned his Facebook page with New Age odes to Mother Earth and affirmations like, "Be love and fearless."

Police said Saturday that Villalobos had told detectives that it was without fear that he leaped from an elevated train into the animal's den. His reason, they said, was that "he wanted to be one with the tiger."