Did a massive comet explode over Canada 12,900 years ago, wiping out both beast and man in North America and propelling the earth back into an ice age?

Albert Goodyear, an archaeologist in USC's College of Arts and Sciences, is a co-author on the study that upholds a 2007 PNAS study by Richard Firestone, a staff scientist at the Department of Energy's Lawrence Berkeley National Laboratory.

Firestone found concentrations of spherules (micro-sized balls) of metals and nano-sized diamonds in a layer of sediment dating 12,900 years ago at 10 of 12 archaeological sites that his team examined. The mix of particles is thought to be the result of an extraterrestrial object, such as a comet or meteorite, exploding in the earth’s atmosphere. Among the sites examined was USC’s Topper, one of the most pristine U.S. sites for research on Clovis, one of the earliest ancient peoples.

“This independent study is yet another example of how the Topper site with its various interdisciplinary studies has connected ancient human archaeology with significant studies of the Pleistocene,” said Goodyear, who began excavating Clovis artifacts in 1984 at the Topper site in Allendale, S.C. “It’s both exciting and gratifying.”

As I've noted before, there is a somewhat out there theory that Clovis technology, which is very similar to early European stone culture, was imported to the new world by prehistoric settlers who crossed the Atlantic during glacial times, possibly on the ice, or in small boats along the ice edge margin.

Younger-Dryas is what scientists refer to as the period of extreme cooling that began around 12,900 years ago and lasted 1,300 years. While that brief ice age has been well-documented – occurring during a period of progressive solar warming after the last ice age – the reasons for it have long remained unclear. The extreme rapid cooling that took place can be likened to the 2004 sci-fi blockbuster movie “The Day After Tomorrow.”

Firestone’s team presented a provocative theory: that a major impact event – perhaps a comet – was the catalyst. His copious sampling and detailed analysis of sediments at a layer in the earth dated to 12,900 years ago, also called the Younger-Dryas Boundary (YDB), provided evidence of micro-particles, such as iron, silica, iridium and nano-diamonds. The particles are believed to be consistent with a massive impact that could have killed off the Clovis people and the large North American animals of the day. Thirty-six species, including the mastodon, mammoth and saber-toothed tiger, went extinct. 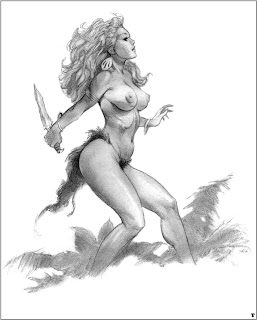 What's really remarkable about this discovery is that they claim that Clovis tools laying on the ground at the tool making site actually cast a shadow in the cometary impact debris:


Goodyear showed LeCompte where the Clovis level was in order to accurately guide his sampling of sediments for the Younger Dryas Boundary layer. He advised him to sample around Clovis artifacts and then to carefully lift them to test the sediment directly underneath.

“If debris was raining down from the atmosphere, the artifacts should have acted as a shield preventing spherules from accumulating in the layer underneath. It turns out it really worked!” Goodyear said. “There were up to 30 times more spherules at and just above the Clovis surface than beneath the artifacts.”

LeCompte said the finding is “critical and what makes the paper and study so exciting. The other sites didn’t have artifacts because they weren’t tool-making quarries like Topper.”

I rank the European Clovis origin theory right up there with Bigfoot for likelihood, but wouldn't it be cool if it actually turned out true?
Posted by Fritz at 8:59 PM