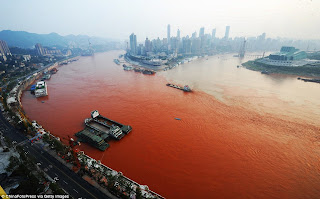 ...the Yangtze river, which runs through the city in south-western China, turned a bright shade of orange-red yesterday.

The waterway where the Yangtze met the Jialin River provided a fascinating contrast as the red started to filter into the other river...

Looks like it might be iron.  If you dump a lot of iron in an acid solution into a basic medium, the iron will precipitate out at as an orange-red precipitate.  You sometime see this in severe cases of acid mine drainage.  There's a lovely site up near the North Branch of the Potomac River in Western Maryland.  However, it could also just be a dye.


Last December, the Jian River in the city of Luoyang, in the north Henan province, turned red after becoming polluted by a powerful dye.

The dye was being dumped into the city's storm drain network by two illegal dye workshops.

Officials raided the factories to shut them down, and then disassembled their machinery.

According to chapter 16, verse 4 of the Bible's book of Revelations, one of the signs that Armageddon is near will be an angel pouring a bowl into the rivers, turning them into blood.

Yes, that's really in the article.  I thought all the bible thumpers were supposed to be in America and not in the UK.

You know what else is a sign of the approach of Armageddon?  Stevie Nicks singing with Chis Isaak...

Wombat-Socho gets the first link with The Other McCain's weekly Rule 5 Review "No-Frills, Rule 5 Sunday".
Posted by Fritz at 12:00 AM