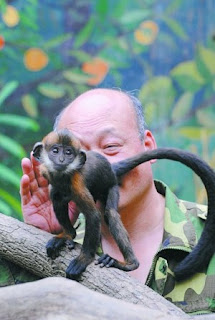 50-year-old Zhang Bangsheng used warm water to clean a small Francois’ Leaf Monkey’s buttocks, then began using his mouth to lick it, not stopping for over an hour, until the little monkey defecated a single peanut. Only after the peanut was defecated did Zhang Bangsheng laugh with satisfaction.

As it is understood, this small Francois’ langur is only 3 months old, and is the first Francois’ Leaf Monkey to be born in nearly 10 years at this animal park. The Francois’ langur is a rare primate from Guangxi and Guizhou and is amongst the nation’s most protected animals. Because it is so precious, the zoo gave it to model worker and high-level expert Zhang Bangsheng to care for and raise.

On the first day of the “May 1st” short holiday, Zhang Bangsheng let the small Francois langur enter the monkey exhibit for the first time to meet visitors so it can see more of the world. The next day, Old Zhang discovered that the little monkey had indigestion and difficulty defecating, and immediately became worried. Seeing peanut shells on the ground, Old Zhang immediately understood that visitors had definitely tossed peanuts to the small monkey, and the toothless monkey swallowed the peanut whole. If it does not quickly defecate it, it would endanger the little monkey’s life.

Because the monkey is too small, it wasn’t suitable to use medicine to let it defecate. The only way was to lick its butt, to prompt it to defecate the peanut, and so the scene at the start of this article occurred.

Now, there is a man dedicated to his job...