Come On Baby, Light My Fire 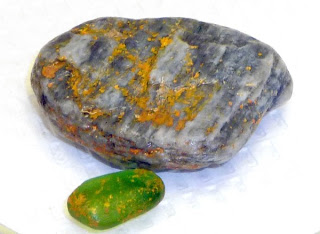 The case of an Orange County woman severely burned after rocks collected last weekend from San Onofre State Beach ignited in her pocket has puzzled scientists, who say they've never seen anything like it and aren't quite sure how it happened.

"It's pretty implausible," said Larry Overman, a professor of chemistry at UC Irvine.

The 43-year-old San Clemente woman, who remained hospitalized Thursday with second- and third-degree burns, visited the northern San Diego County beach last Saturday with her family, authorities said. Her name has not been released.

Her children collected rocks, including two that were distinctive — one was large and a marbled gray; the other much smaller and a Teenage Mutant Ninja Turtle green.

Both of the beach stones were streaked and flecked with bright orange.

The mother put the rocks in her right pocket and went home. Then they suddenly ignited.

Witnesses reported seeing flames coming from her shorts. She had second- and third-degree burns from her right knee to her right thigh, with second-degree burns on her hands. Her husband also had burns on his hands from trying to help her.


The Orange County Health Care Agency examined the two rocks, and tests revealed a "phosphorous substance" on the rocks, which now have been sent to a state laboratory for further testing, said Tricia Landquist, an agency spokeswoman.

That discovery, however, has only added to the mystery.

Scientists wondered: How does a chemical like phosphorus wind up on a Southern California beach? And why did a substance so volatile not burst into flames sooner?

"I can't think of a scenario of chemicals on the beach that would have the properties that are described," Overman said.

Andrew Borovik, also a chemistry professor at UCI, had similar doubts. He said that phosphorus — which is typically kept in a controlled setting and stored in water — could indeed ignite when air touches it. But he was unsure how the phosphorous substance could be part of a rock.

"I don't know if it exists just sitting around on the beach," Borovik said. "It just seems unlikely."

James Earthman, a professor of chemical engineering and material science at UC Irvine, had a few possibilities: The inorganic chemical could have come from a passing ship or from nearby Camp Pendleton. And the reason for the delayed combustion could be because the rocks were still wet and didn't ignite until they were dry — and, he noted, we don't know what else could have been in the woman's pockets.

Hmm.  My theory (FWIW) is that they picked up a piece of wet (and therefore non reactive) white or red phosphorous remaining from from a shell at Camp Pendleton, which ignited the cloth in her shorts.  There's probably nothing left of the original piece of phosphorous, but the residue on the other rocks.  The orange looks like rust to me; maybe some reaction involving some metal object in her pocket as well.

Email ThisBlogThis!Share to TwitterShare to FacebookShare to Pinterest
Labels: weird