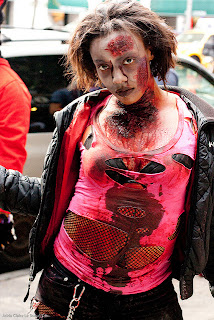 I should feel guilty doing two silly zombie posts in less than a week; naw, not really.


The “cannibal” attacker who chewed off another man’s face in a gruesome crime in Miami Saturday is suspected to have been under the influence of a dangerous drug sold under the innocuous name “bath salts.” ....

Bath salts, also known by street names like “Ivory Wave,” “Vanilla Sky,” “Bliss,” and “Purple Rain”, made headlines last year after a rush of emergency room visits, thousands of calls to poison centers and several deaths. The man-made, synthetic drug is made from amphetamine-like chemicals and causes a unique combination of effects on the brain.

“If you take the worst attributes of meth, coke, PCP, LSD and Ecstasy and put them together, that’s what we’re seeing sometimes,” Mark Ryan, the director of the Louisiana Poison Center, told the New York Times.

The powdery substance comes in a small packet, and can be inhaled, swallowed or injected, according to a report from the National Institutes of Health.

The drug is manufactured by street chemists and sold in convenience stores or online, often legally. Sellers were able to sell the drug legally since its emergence in 2009 by marketing the substance as either bath salts or “plant food” or “insect repellant,” and stipulating “not for human consumption” on the label. 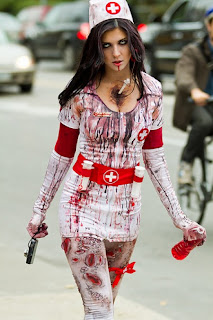 Every few years, some new super drug comes out that's cheap, easy to make, and not yet illegal.  A few tragedies ensue, Congress makes a new law, with super strict penalties.  LSD, (and a host of other hallucinogenics in my lifetime), crack, ecstasy, and now probably bath salts.  The problem never stops, but the crime around the problem continues, unabated, fueled the by the profits that come when the price is artificially raised by the interdiction efforts.  Life goes on.  Time to get the law out of the business of illegalizing drugs, and find a way to get serious with treatment.

Now, another zombie outbreak in Hackensack, New Jersey (I mean, how could you tell?):

Hackensack Man Stabbed Himself, Threw His Skin And Intestines At Officers 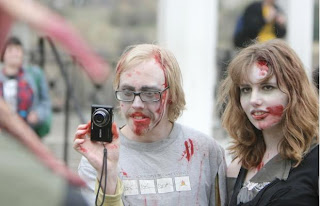 A man who stabbed himself and threw pieces of his skin and intestines at police officers trying to subdue him was hospitalized in critical condition on Monday, authorities said.

Officers encountered 43-year-old Wayne Carter on Sunday morning when they responded to reports of a man barricaded in a room in Hackensack and threatening to harm himself, Lt. John Heinemann said.

Two officers kicked in the door and saw Carter in a corner, holding a knife in his hand, police said. Carter, ignoring the officers’ orders to drop the knife, stood up and stabbed himself in the abdomen, legs and neck, they said.

Carter yelled at the officers and took an aggressive stance, and the officers used pepper spray in a bid to subdue him, but it had no effect, Heinemann said. Police said that Carter then cut off pieces of his skin and intestines and threw them at the officers.

The officers decided to retreat and call in the Bergen County SWAT team, Heinemann said. Carter finally was restrained and was taken to a hospital just before midnight. 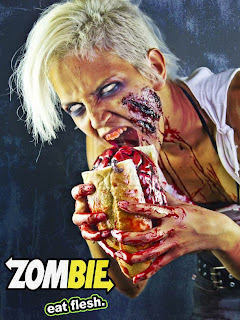 No word yet on whether this was drug induced zombism (which is really like the Haitian original version, sort of a drug induced unpaid internship), or the George Romero version.  Meanwhile, somebody is at least doing something important about the imminent zombie apocalypse; considering the tax consequences of becoming one:


I]t seems a stretch to conclude that those who transform seamlessly into zombies should be considered dead. They never lose heart or brain function, though they now function quite differently from before. While it might be tempting to declare them dead, significant line-drawing problems would arise as one tried to distinguish between zombies and those who have suffered some mental or physical breakdown. Put differently, were such zombies to be considered dead because they suffered a personality change, physical disability, or decreased brain function, the door would be open to declaring dead a wide range of people currently considered to be alive. 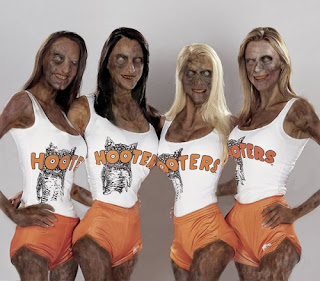 I know a few people who might just fall into the zombie category were this to be the criterion.


If people who become zombies are considered dead for federal estate and income tax purposes, little will have changed. Becoming a zombie will be no different than dying from pneumonia, aside from the part where you eat your friends and loved ones. However, other outcomes are possible. For instance, if someone who becomes a zombie is considered not dead (as opposed to undead) for estate and income tax purposes, neither the estate tax nor the basis reset would be triggered. We would be in a situation similar to the one Congress negotiated as part of the Bush tax cuts, which relaxed the basis reset rules in conjunction with eliminating the estate tax. This could turn out well for those intending to hold on to their property for a long time. Alternately, both the estate tax and basis reset could kick in only when a person's zombie was dispatched. Were this the rule, people might have incentives to become zombies to delay the application of the estate tax.

However, these are not the only two options. Until now, the estate tax and income tax have been construed consistently with regard to who is a decedent. This need not be the case. In other words, it is possible that the transition from alive to undead could trigger the estate tax but not the basis reset. Were this to happen, taxpayers who become zombies would be hit twice, and years of tax planning could go out the window. Alternately, becoming a zombie could be deemed not to trigger the estate tax but to allow basis reset. Under this scenario, the government would forego two opportunities to raise revenue, significantly increasing whatever the then current deficit would be, especially if the outbreak were severe. 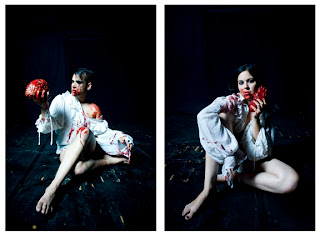 It's just sad when all life decisions, like whether or not to succumb to zombism have to be made based on the tax consequences.  And it's even worse that they don't have the rules already laid out for that eventuality.  There otta be a law!


He also tackles other tricky aspects of zombification: whether a person is still considered married if their spouse has become undead, the administrative problems of resurrecting dead social security numbers, and the difficulty many zombies would likely have in filling out income tax forms.

And then he goes on to consider vampires and other forms of undead.  But maybe that's for another post.

I thank Wombat-Socho for helping to drive traffic my direction with his Rule 5 roundup at The Other McCain, "All Over But the Crying."
Posted by Fritz at 6:00 AM