The CBS 3 I-Team has learned that a Catholic priest who was removed from the ministry over sex abuse allegations now holds a sensitive security post at Philadelphia International Airport.

The security checkpoint between Terminals D and E is a busy place where thousands of people – including lots of kids – pass through every day. But you might not believe who the I-Team observed working as a TSA supervisor at that checkpoint this week: Thomas Harkins.

Until 2002, Harkins was a Catholic priest working at churches across South Jersey. But the Diocese of Camden removed him from ministry because it found he sexually abused two young girls. Now, in a new lawsuit, a third woman is claiming she also is one of Harkins’ victims.

The I-Team asked Harkins about the suit as he was leaving his shift at the airport. 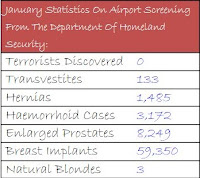 “I have nothing to say,” was Harkins’ reply.

I said this once before recently, but at the risk of being redundant, I'll say it again.  TSA must die.  The agency can show no effect on terrorism.  Terrorists keep getting caught anywhere but at TSA  check points.  It only serves to enormously complicate the process of flying, and employs a large number of people for the sole purpose of aggravating the flying public.

It's all just security theater to make you feel safer.  A helpful infographic here (source).