The new device is a cross between today’s transistors and the vacuum tubes of yesteryear. It’s small and easily manufactured, but also fast and radiation-proof. Meyyappan, who co-developed the “nano vacuum tube,” says it is created by etching a tiny cavity in phosphorous-doped silicon. The cavity is bordered by three electrodes: a source, a gate, and a drain. The source and drain are separated by just 150 nanometers, while the gate sits on top. Electrons are emitted from the source thanks to a voltage applied across it and the drain, while the gate controls the electron flow across the cavity. In their paper published online today in Applied Physics Letters, 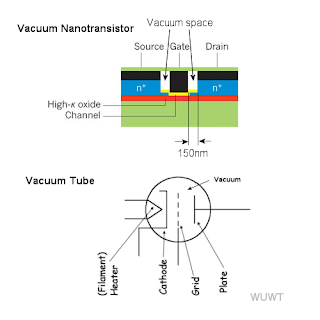 Vacuum tubes suffered a slow death during the 1950s and ’60s thanks to the invention of the transistor—specifically, the ability to mass-produce transistors by chemically engraving, or etching, pieces of silicon. Transistors were smaller, cheaper, and longer lasting. They could also be packed into microchips to switch on and off according to different, complex inputs, paving the way for smaller, more powerful computers.

But transistors weren’t better in all respects. Electrons move more slowly in a solid than in a vacuum, which means transistors are generally slower than vacuum tubes; as a result, computing isn’t as quick as it could be. What’s more, semiconductors are susceptible to strong radiation, which can disrupt the atomic structure of the silicon such that the charges no longer move properly. That’s a big problem for the military and NASA, which need their technology to work in radiation-harsh environments such as outer space.

I remember the transistor revolution (a little dimly, it's been a while).  Old TVs and radios had vacuum tubes, they died frequently, and you had to pull them out and find which one was bad and replace it; today you just throw away the TV and buy a new one.  A hand held radio was a virtual miracle.

High end guitar amps are still mostly powered by vacuum tubes, and most of those tubes are now available from Russian sources. The Russians continued to use them for many things, including jet aircraft long after we abandoned them for virtually everything else.

It's too early to say if this could be the beginning of a new era in electronics, but it would be cool if it was.  Someday soon, we'll run out of atoms for Moore's Law to continue, so maybe this will stave off end of the continued improvements in electronics a few more years.
Posted by Fritz at 6:00 AM