Memorial Day at the Beach 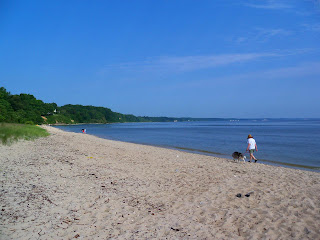 If Memorial Day does mark the beginning of Summer, today was a fine example of that.  Clear and calm, with temperatures up to 80 at 9:30 AM and rising, and enough humidity to be noticeable but not oppressive. 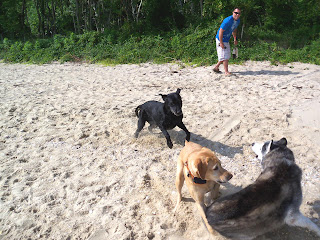 We ran into a guy with a couple of dogs; he thought they'd be friendly, but an adolescent male violated Skye's  sense of propriety, and we had to pull them apart.  No blood was spilled but a little snarling and yapping caused us to separate them again. 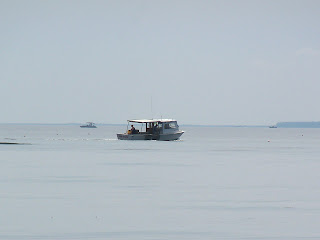 A crabber working in close to shore.  No day off for him. 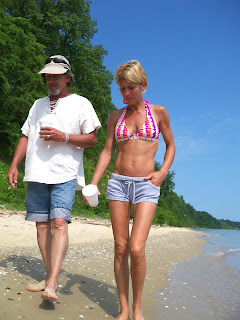 We met a couple, Dick and Cassie, from the Pittsburgh area, staying at the cottages, where they say they have stayed Memorial Days for 30 years.  Now, that's continuity.  We might have met 25 years ago then, because when Georgia and I and the kids moved to Maryland on June 1, 1985 , we stayed at the cottages for several weeks, until we could move into our house. 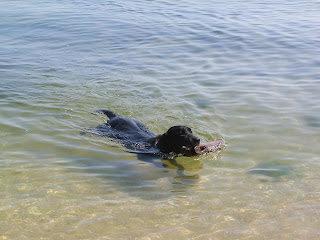 Just so Joel won't feel the Red is being slighted... Despite being raised as a pet dog, and not a working dog, Red still has that retriever spirit.  Skye, on the other hand, figures if you throw it, you must not want it back. 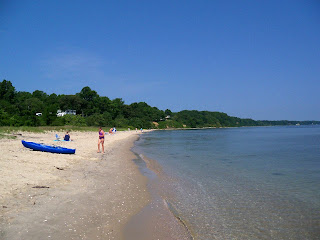 By the time we were through with the walk, the activity level on the beach was starting to pick up a lot. Gonna be hopping later this afternoon.
Posted by Fritz at 1:20 PM