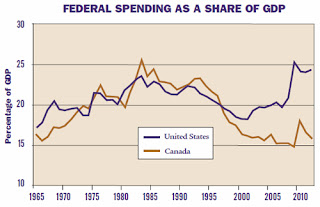 We Can Cut Government: Canada Did

Two decades ago Canada suffered a deep recession and teetered on the brink of a debt crisis caused by rising government spending. The Wall Street Journal said that growing debt was making Canada an "honorary member of the third world" with the "northern peso" as its currency. But Canada reversed course and cut spending, balanced its budget, and enacted various pro-market reforms. The economy boomed, unemployment plunged, and the formerly weak Canadian dollar soared to reach parity with the U.S. dollar.

In some ways the United States is in even worse fiscal shape today than Canada was two decades ago. For one thing baby boomers are now retiring in droves, which is pushing the federal government deeper into debt every year. America risks becoming a "first world" country like those in Europe, where huge deficit spending is wrecking economies and ruining opportunities for young people.

America needs to get its fiscal house in order, and Canada has shown how to do it. Our northern neighbor still has a large welfare state, but there is a lot we can learn from its efforts to restrain the government and adopt market-oriented reforms to spur strong economic growth...  Read the rest

It won't be easy to cut government spending.

Second, there are a lot of people directly and indirectly dependent on the government teat.  To end that suddenly will would cause massive unemployment and unrest.  The answer is not that you can't do it, but you have to do it incrementally and with a decent plan.  I know, that makes it very nearly impossible.  But that which is unsustainable will not be sustained.  The only question is whether the end is gradual and peaceful or sudden and violent.

Which do you prefer?