A turtle excluder, or Bycatch Reduction Device, keeps the larger-shelled terrapins out with the help of a gate. According to the DNR, noncommercial crab pot owners are required by law to have turtle excluders installed in each funnel entrance. Each pot also is required to be marked with the owner's name and address.

Two crab pots are allowed on each waterfront property as long as they are legally set in tributaries where the terrapins live. Commercial watermen can set them in deeper waters of the Chesapeake Bay.

Diamondback terrapins are not yet endangered as sea turtles are but have suffered over the years from a decline in water quality and loss of habitat.

"As denizens of the Chesapeake's beaches and shorelines, terrapins are particularly vulnerable to shoreline development and hardening," Jack Cover, National Aquarium curator, said in the DNR release. "People who live on the shores of the Chesapeake Bay and Maryland's coastal bays have the special privilege of setting crab pots. But with that comes the responsibility to take the simple steps to make their pots turtle-friendly. Nobody wants to find a drowned diamondback terrapin in their crab pot." 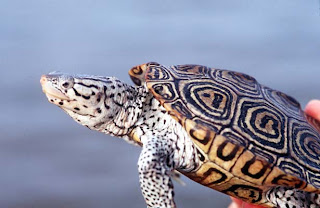 Until 2007 Maryland still had a commercial fishery for Diamond Back Terrapins, however, the fishery was declining, and was halted.

The history of the eating terrapin in Maryland and Virginia is pretty interesting.  Once they were so common they formed a staple in slaves diets on tobacco plantations; a wagon load could be purchased for $1, and slaves once rebelled against eating them.  Later, "turtle" soup came into vogue, and a new market developed.
Posted by Fritz at 7:08 PM