Gamesa postponed the deployment of a 5-megawatt prototype in Virginia’s Chesapeake Bay because of doubts about permitting and sales prospects, the company said today in a statement. It will move forward with a similar project in Spain.

There are no offshore wind projects in operation in North America and it’s not clear when there will be demand for Gamesa’s sea-based turbines in the region, said David Rosenberg, a spokesman for the Zamudio, Spain-based company.

If it's so environmentally friendly, why would they have trouble with permitting? 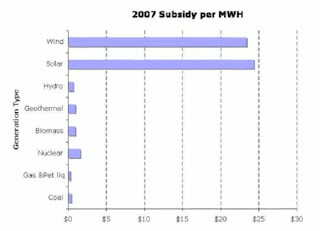 “A viable commercial market in the United States is still farther out, as much as three or four years away, at the earliest,” the company said in the statement. The lack of a mature market makes it “extremely difficult to justify the enormous expenditure of capital” needed to build and install the prototype, it said.

Gamesa said it’s “approaching completion” of a critical design review for the Virginia turbine and will suspend the project once that’s finished.

When wind power companies aren't willing to bet on their product despite enormous subsidies relative to other forms of energy, maybe, just maybe the technology is premature.