...When your eyeballs turn from jello to soup.

A few days before we were set to go on the the trip to Alaska, I noticed something odd was going on with my right eye (for those who have followed this, I had a cataract in my left eye operated on in October).  The vision was very cloudy, bright lights had huge halos and the cloudiness would come and go.  I had a notion of what was happening, so I didn't say anything to Georgia, and we went on the trip anyway.  It has continued to improve, but upon getting back I made an appointment to get it looked at, and went this afternoon. 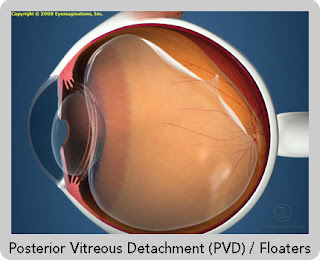 While I had not remembered the name of the condition, I had guessed what it was pretty accurately.  It is called Posterior Vitreous Detachment, and it is caused by the aging of the "vitreous" (what we used to call vitreous humor or eyeball goo) of the eye, the clear goo that fills most of the eyeball.  When you are young, it is the consistency of jello, but as you age it becomes thin and watery, and shrinks away from the retina.  The remaining trash from this process forms floaters, often a large one which interferes with the vision.  Mine seems to wander around and get in the way fairly often, although the problem is becoming less pronounced daily. One symptom I missed was flashing spots (where the vitreous tugs on the retina as it pulls away).  Hey, we used to pay good money for that.

The good news is that it is basically harmless (though occasionally it can tear the retina), and the effects fade with time.  The bad news is that there is no simple and convenient treatment.  I asked the doc if she couldn't just stick a straw in there and suck out the crap, and she said that maybe a retina surgeon could, but that it wasn't worth the risk.
Posted by Fritz at 7:07 PM

Email ThisBlogThis!Share to TwitterShare to FacebookShare to Pinterest
Labels: health, Me