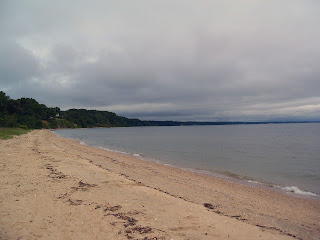 The conditions here this morning were pretty much the same as in Anchorage two mornings ago, cloudy and rainy, except for that temperature thing.  It was more like 70 F here instead of 40 F.  Shorts and T-shirt weather instead of jeans and flannel shirts.

An interesting version of the beach's colors, courtesy of Paintshop Pro's temperature correction.  It looks a little too pink to me. 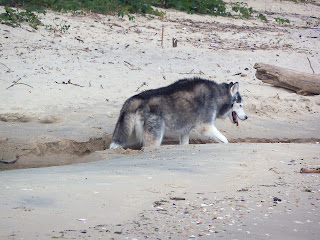 Skye was pretty happy to see us, and clung pretty close last night.  But she was raring to get back down to the beach.  We met Joel and Red on our way back, and filled Joel with some misinformation about the cruise, or at least Georgia did. 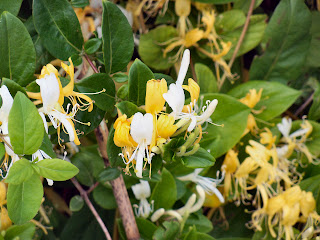 The flower du jour was the Japanese Honeysuckle, a common invasive species in the US.  I remember sipping nectar from these as a kid back in Los Angeles.  It's probably illegal to do that now. 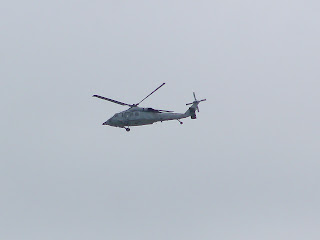 This helicopter made a pretty low pass just off shore.  I assume from the lack of markings that it's military, probably from Patuxent River Naval Air Station, just down the bay, but I don't know for sure.  That's pretty much a stock response when something odd flies by here. 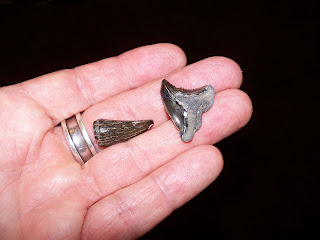 Georgia won the prize for the best fossils of the day with these, a large Snaggletooth shark tooth (on the right), and a crocodile tooth (on the left).  Joel had found a huge Mako tooth over the week and still had it to show us, a once a year type tooth, but foolishly, I didn't ask to take a picture of it.
Posted by Fritz at 8:00 PM