This story has been around for a few days, and I haven't done anything with it yet, so I thought I should:

The facts (at least as I have seen them):

Elizabeth Warren, blonde, blue eyed, Harvard Professor in bankruptcy law, failed appointee to the Consumer Financial Protections Bureau (blocked by Senate Republicans) and currently candidate for Senator of Massachusetts, facing Scott Brown, was revealed to have had herself listed in faculty lists as a minority member when she was hired. 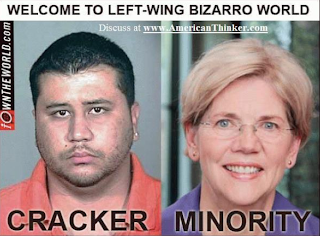 She claims that she is part Cherokee from a triple great grandmother, which would make her only one thirty second Cherokee.  The claim is only weakly verifiable at this point; an electronic record seems to suggest it, but actual paper documents dating to the period are still absent.

She has said listed herself as a minority professor to get social invitations from other Indian Native American professionals, and dropped the listing when those invitations did not materialize (Hey, maybe you have to be the one to reach out).  She also claims to believe the ancestry claims because of her (and her grandfather's) high cheek bones....

First, it's a reasonable supposition that she first started using the Indian Native American label when she was an up and coming professor at lessor schools, in an era when schools were under lots of pressure to hire minority candidates.

Did it matter that she was listed as a minority candidate; did she get any positions that she might ot have had she not claimed minority status? It's highly unlikely any paperwork exists that shows that she was selected over more worthy candidates due her status as a minority.  At best, it was something bandied about in meeting between deans and faculty, possible with deans promising that faculty would be allowed more faculty if they would just select a minority.  Hey, it happens.  I don't doubt her qualifications, as much as I think her politics are dead wrong.

Second, she dropped the listing when she reached the pinnacle of Academe, a professorship at Hahvahd, and didn't need it anymore, and that it became a liability (oh, you were only hired because you were a minority). Even worse, if you get into politics, people actually start checking your claims...

So yes, I think she was at least attempting to take unfair advantage of the Affirmative Action programs.  I don't know whether she succeeded or whether we'll ever know for sure.

And here's what I think about that...


And yeah, I couldn't resist. You don't have to start it if you don't want; but I know you will...