Zombies Blamed for Honeybee Die Off

...John Hafernik, a biology professor at San Francisco State University, had collected some belly-up bees from the ground underneath lights around the University’s biology building. “But being an absent-minded professor,” he noted in a prepared statement, “I left them in a vial on my desk and forgot about them.” He soon got a shock. “The next time I looked at the vial, there were all these fly pupae surrounding the bees,” he said. A fly (Apocephalus borealis) had inserted its eggs into the bees, using their bodies as a home for its developing larvae. And the invaders had somehow led the bees from their hives to their deaths. A detailed description of the newly documented relationship was published online Tuesday in PLoS ONE. ... 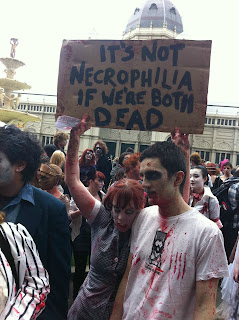 Colony collapse disorder is a serious problem for bee keepers.  If this turns out to the cause (or at least a major contributor to the causes, maybe they can find a way to treat the problem.  Previously proposed causes include mites, fungus, pesticides, cell phones, starvation, global warming climate change, genetically modified crops, and voodoo.  OK, I made that last one up.  But it turns out it might be closer...


The parasitic fly lays eggs in a bee’s abdomen. Several days later, the parasitized bee bumbles out of the hives—often at night—on a solo mission to nowhere. These bees often fly toward light and wind up unable to control their own bodies. After a bee dies, as many as 13 fly larvae crawl out from the bee’s neck. The bees’ behavior seems similar to that of ants that are parasitized—and then decapitated from within—by other fly larvae from the Apocephalus genus.

“When we observed the bees for some time—the ones that were alive—we found that they walked in circles, often with no sense of direction,” Andrew Core, a graduate student who works with Hafernik and a co-author on the new paper, said in a prepared statement, describing them as behaving “something like a zombie.” (Read about other parasites that turn their hosts into zombies in the article “Zombie Creatures.”)

Zombies; is there anything we can't blame on them?
Posted by Fritz at 5:29 PM